Difference Between Enunciation and Pronunciation: A Crystal-Clear Explanation

Pronunciation and enunciation are closely related terms that often get confused with each other. Pronunciation is related to the word itself, focusing on which syllables should be emphasized and how certain letters (or combinations of letters) should sound when spoken. Enunciation refers to how clearly and distinctly a particular individual forms the sounds that make up a word. 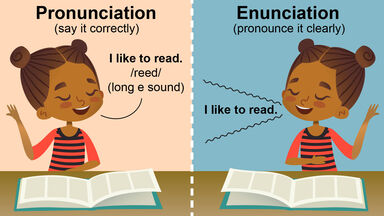 difference between pronunciation and enunciation
Advertisement

It’s not unusual for words in the English language to have more than one pronunciation, even though there is no difference in spelling. Some words are spelled differently yet are pronounced the same way. For example, you can pronounce the word “read” two different ways. One of the pronunciations of “read” sounds the same as “red.”

To further complicate pronunciation, many common English words have silent letters. For example:

Enunciation can be defined as speaking clearly, stating each word fully and distinctly.This is a function of how an individual speaks rather than how a word should be pronounced.

Enunciation problems can take several forms. A few examples include:

Overcoming enunciation issues involves not only pronouncing words properly, but also making sure to articulate (speak clearly) each word and to speak up so that your voice properly projects.

How to Improve Enunciation

Improving your ability to enunciate requires practicing how you speak and being mindful of doing so in a way that leads to clear communication that is easily understood by other people. Activities that can help you learn how to enunciate better include:

Pronunciation vs. Enunciation: Both Are Important

In order to communicate effectively, it’s necessary to pronounce words correctly while also enunciating as you speak.

You could pronounce a word correctly but fail to enunciate properly. For example, you could make the sounds associated with a word correctly (pronunciation) yet mumble as you are speaking or use a rate of speech that is so fast that the words run together (poor enunciation).

You could enunciate properly, yet mispronounce a word. You could speak clearly and distinctly (enunciation) yet use the wrong syllable emphasis or letter sounds for the words you are saying (mispronunciation).

Now that you are familiar with the difference between pronunciation and enunciation, take steps to improve your skills in both areas. Review commonly mispronounced words so you can master how to say them correctly and focus on speaking clearly and distinctly so that other people don’t have to struggle to tell what you are saying. Doing so will help you develop strong verbal and oral communication skills.