Psychic vs. Medium: How They Differ

Some people have incredible intuition and seem able to tell the future or determine the good and bad vibes of people around them. These are known as psychics. Others, known as mediums, seem able to commune with spirits who have passed on. While some people might think of psychic and medium as synonyms, they have nuanced differences. 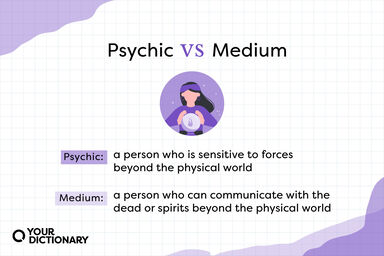 Woman with crystal ball with psychic vs medium definitions
Advertisement

Psychic: Sensitive to Outside Forces

As a noun, a psychic is a person who is sensitive to forces beyond the physical world.

As an adjective, psychic refers to anything relating to the human mind or something that is mental, not physical.

What Does a Psychic Do?

Psychics can foretell potential future events, reveal secrets or otherwise provide information you may not know. Using their intuitive abilities, psychics can also provide guidance and insight on love, relationships, family, money, career, and other aspects of life.

The processes can vary from psychic to psychic. Most psychics work through a mix of intuitive abilities, reading auras and various other spiritual channels, like tarot cards, runes and crystal balls.

When referencing a person, a medium has the ability to communicate with the dead or other agents beyond our known physical world. Medium hints at the role: They act as an intermediary or middle point between the world of the living and the world beyond.

Medium can also mean numerous things outside the spiritual realm, including:

What Does a Medium Do?

A medium can communicate with spirits, serving as a channel or vessel between the living and the dead. This is less about seeing ghosts or spirits and more about sensing them or feeling their energy.

Communicating with the spirit world allows mediums to provide a wide range of services, including relaying information, finding lost or missing objects and helping earthbound spirits cross over to the other side.

The Difference Between Psychics and Mediums

While there is certainly some overlap between the two, psychics and mediums have different skills and abilities. Psychics, for instance, may not be able to communicate with spirits, while mediums may not be able to read auras or use other spiritual channels like tarot cards or crystal balls.

Psychics and mediums are often associated with a wide range of other spiritual terms and occupations.

Fortune tellers are specifically involved with telling a person their future. Many psychics do practice fortune-telling.

Clairvoyance, also known as “clear seeing,” is also often associated with telling the future, but it is much broader than that and involves keen perception and seeing visual phenomena with your eyes or mind’s eye. Psychics may have clairvoyance along with clairaudience (clear hearing) and claircognizance (clear knowing).

Many non-psychics have empathy, which is essentially the ability to put yourself in other people’s shoes and relate to others. For an empath, that ability is cranked to 100, allowing them to physically feel another person’s feelings and even their pain.