Queen vs. Queen Consort: What Does Each Title Mean?

How do you address the wife of the king? Is she the queen — or is she the queen consort? And is that the same as a queen dowager or queen regent? Sorting out these details may seem complicated, but when it’s your turn to visit Buckingham Palace, you’d best know your p’s (princesses) from your q’s (queens). 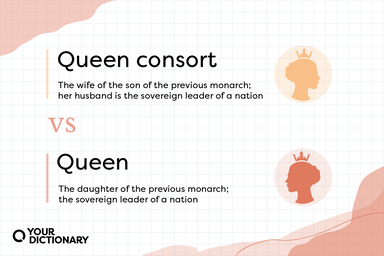 "Queen consort" and "Queen" with definitions from the article.
Advertisement

What Is a Queen Consort?

A queen consort is the spouse of the king. She is not the sovereign, meaning that she does not have any hereditary ties to the throne. Her husband is the son of the previous reigning monarch. Think of a modern first lady — she has the same social status as her husband, the president, but not the same duties or powers.

Consort comes from the Latin consortem and the Old French consorte, meaning “partner” or “wife.” Therefore, a queen consort is the wife of the current monarch.

The difference between a queen, also known as a queen regnant, and a queen consort has to do with royal position and lineage.

Do You Capitalize “Queen Consort”?

Like other official titles, we do not capitalize queen consort when used as a generic term or common noun.

For titles such as king or prince, you’d capitalize them when speaking about a specific person with that title (“King Charles III expressed his congratulations to the winning team”) because it’s a proper adjective. But queen consort isn’t typically used before a person’s name; instead, it’s shortened to queen (and then capitalized). When discussing

You may see the queen consort capitalized as The Queen Consort in various publications, including communications from the palace. Capitalizing the title (as well as The King) conveys a higher level of respect for the position.

How Do You Address a Queen Consort?

The official title for a queen consort is Her Majesty (HM) The Queen Consort. If speaking or writing to her, your greeting should be “Your Majesty,” the same way you would greet the king or a queen regnant.

When speaking or writing about her, you can refer to the queen consort as:

Duties of a Queen Consort

Historically, the duties of a queen consort have included supporting her husband and providing the kingdom with heirs to the throne. Her marriage to the king of a different nation may have also served as a symbolic alliance between their countries.

Today, a queen consort supports her husband, makes public appearances on his behalf, works with the citizens of their country, and cares for their children. She does not have the same government or military power as her husband.

A queen consort can have additional titles after her husband dies, depending on the status of her children.

Of these titles, only queen regent gives the queen consort any true powers of state. The other titles are symbolic and indicate that the former queen should be treated with the same respect as when she was queen consort.

Could There Be a King Consort?

Queen Elizabeth II was married to Prince Phillip, Duke of Edinburgh, for 73 years before his death in 2021. So why wasn’t he named king consort if the spouse of the king is the queen consort?

There’s actually no such rank as king consort. Because the rank of king is considered higher when compared to the rank of queen (even though a queen regnant has the same rank as a king regnant) naming the queen’s husband as king consort could diminish her own power in others’ eyes.

Only the son of a monarch can be considered a king. Therefore, Prince Phillip’s official position was prince consort, as it would be for any husband of a queen regnant.