Realise vs. Realize: Why They're a Letter Apart

If you’ve ever read a book or newspaper published in the U.K., you may find that the word realize is also spelled realise. But is the difference due to spelling standards, or is one preferable to the other? 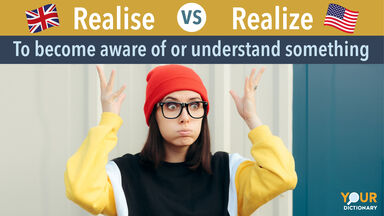 Realise (or Realize) the Difference

Meaning and Origin of Realise

Realise is the commonly accepted British English spelling of the verb meaning “to understand to be true" or "become aware of.” It can also mean to “make real,” “exhibit the existence of” or “cause something to happen.”

How to Use Realize in a Sentence

Realize is the American English standard spelling of realise. It can mean "to indicate awareness," "understand something or someone" or that "something has been actualized or made real."

The Reason for the Difference

Generally speaking, the -ize ending is the American spelling standard and the -ise ending is the British spelling standard. This applies to all words with these endings. Realise and realize are derived from the French word realiser — hence the -ise spelling. Some words, typically of French origin, retain the -ise suffix while words that end in -ize correspond more closely to words of Greek origin that have an -izo root. The reason for the split between -ise and -ize ultimately comes down to dictionaries and recommendations from writing guides. For instance, the Oxford English Dictionary, A Dictionary of Modern English Usage and many others favor -ize in most cases. However, Oxford University itself does not agree with this and recommends using -ise for British spelling in their style guide.

Despite the standard being that British English uses the -ise suffix generally, that is not always the case. This is known as Oxford spelling, which is when the British spelling uses the suffix -ize. Oxford spelling is frequently used by international organizations such as United Nations Organizations and the International Organization for Standardization, British scientific and academic journals and in other technical and formal works. Ultimately, the spelling you use will depend on who you are writing for, the standards they recommend and the standards that are taught in your country.

Often the reason for spelling differences comes down to American and British spelling practices. For example, the spelling of practice and practise varies depending on which side of the pond you're on. Finally, review the spellings and functions of suffixes to better understand how they alter words.