Recession vs. Depression: Understand Their Meaning

If you were in the workforce (or entering the workforce) during the Great Recession of 2008 or the Covid-19 Recession of 2020, you know firsthand how much an economic recession can affect your personal finances. But while there have been 11 major U.S. recessions in the last century, there’s only been one depression — and its effects were so staggering that they impacted the global economy itself. So what’s the difference between a recession and a depression, and how do you know if you’re in one? 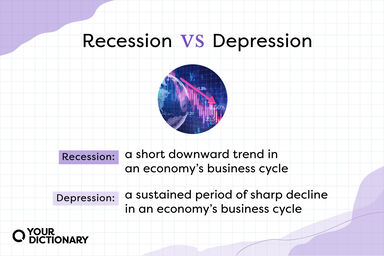 How Is a Recession Different From a Depression?

While the economic definitions of a recession or depression may differ, most economists agree that these economic periods differ in general ways:

A Recession Is a Downtrend

The word recession comes from the Latin recedere, meaning “to go back.” It can refer to any act of receding or moving away, but economically, recession describes a period of temporary economic decline (usually two quarters or more of a falling GDP, or Gross Domestic Product) that affects both a country’s larger economy and individuals’ ability to earn a living.

A Depression Is a Much Deeper Downtrend

From the Latin deprimere (“to press down”), the word depression in economics describes a much more impactful and devastating event. While a recession is marked by a slowdown of economic activity, a depression may involve a severe reduction or even a complete halt of trade and commerce. In drastic cases, one country’s economic depression can impact the entire world for years.

The Great Depression, which began when the stock market crashed in October 1929, was the last American (and world) depression in history. However, several depressions occurred beforehand, challenging the country’s new and growing economy. Major depressions in American history include:

Managing Your Money — and Your Economic Lingo

Avoid your own periods of economic uncertainty with more guides to financial vocabulary, including: