Recurring vs. Reoccurring: Get It Right Every Time

The words recurring and reoccurring are very similar in spelling, pronunciation and meaning, but they aren't synonyms for one another. Because these words are so close in meaning, it can be very tricky to choose the correct term to accurately convey what you mean. Fortunately, once you know exactly how these terms differ you'll be able to consistently make the right selection. 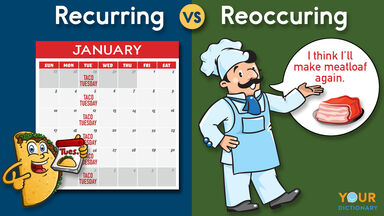 Recurring and reoccurring have nearly identical definitions, with one important difference. Both words refer to something that is repeated, such as an event that happens again after the first time it occurs. The difference lies in the regularity with which the event occurs.

A single repetition (or a few repetitions) of something is a reoccurring event. However, it's a repeated occurrence that doesn't meet the definition of recurring unless it continues to happen over and over. There isn't a specific number of times that something has to be repeated in order for it to be considered recurring.

To help remember the difference, link these words in your mind to the concepts of repeating versus being repetitive. This simple tip can help you select the correct word every time.

Consider these real-world examples of repeat situations that can be described using either recurring or reoccurring. The first time (or even a few times) the situation happens, it is reoccurring. When it becomes something that happens quite frequently or at regular intervals, then it is recurring.

It's not unusual for people to have similar dreams more than once.

Medical conditions can come back after they heal or are cured.

There is a difference between a person who only very occasionally arrives late versus someone who is chronically tardy.

Are repeated recipes reoccurring or recurring? It depends if you make them every now and then or quite often.

Alternate Forms of Reocurring and Recurring

There are a few different forms of the words reoccurring and recurring, such as recur vs reoccur. Each represents a different part of speech.

The words recurring and reoccurring are so similar that your audience will probably know what you mean even if you choose the wrong word. However, it's still very important to make sure you're using words correctly. Even when the difference between two terms is so small that it seems like a minor semantic detail, using any words incorrectly can lead to misunderstanding. Take the time to learn the difference between commonly confused words so you'll be able to communicate clearly and effectively. Start by exploring other words that have a one-letter difference such as especially vs. specially.