Reeking vs. Wreaking: What Kind of Havoc Are You Unleashing?

“Reeking havoc” is quite different from “wreaking havoc.” One refers to causing trouble, and the other refers to trouble that smells extremely bad. Are you using the correct phrase to describe your non-stinky chaos? 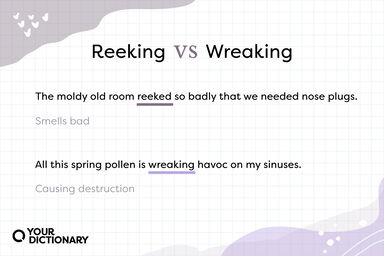 Reeking vs Wreaking with examples and definitions
Advertisement

When you’re describing someone or something that causes trouble and/or destruction (both figurative and literal), you say they’re “wreaking havoc,” not “reeking havoc.” For example:

The word wreak means “to cause or inflict” in the sense of causing harm. It comes from the Old English wrecan and Dutch wreken, both of which mean “to drive out,” as do the related words wreck (“to destroy”) and wretch (“a destroyed person”).

As a transitive verb like give or hate, wreak requires an object to make sense. A person can’t just wreak, they have to wreak something — and colloquially, they’re usually “wreaking havoc” (“causing destruction”).

Where Does Havoc Come From?

Wreaking means “causing,” but what about havoc? The noun means “destruction” or “devastation,” and comes from the Old French phrase crier havot, meaning “to cry havoc.” It was a battle call for soldiers to pillage and plunder a town — the essence of “devastation.” Today, havoc typically appears in the phrase “wreak havoc,” but one can also “play havoc,” “cause havoc,” “unleash havoc,” or “raise havoc.”

While you’ll typically find wreak and havoc together, you may also find wreak in other sentences about causing harm or inflicting punishment, including:

The word reek means “to stink.” It comes from the Old English recan, meaning “to emit smoke,” and has since expanded past malodorous smoke to include all the bad smells you can think of.

Unlike wreak, reek is an intransitive verb — it doesn’t need an object to make sense. For example, “Old fish can reek,” but something can’t “reek old fish.” It needs a preposition between reek and the object of the sentence (“This reeks like old fish.”)

Reek typically refers to literal smells in the air. Rarely, it can be a synonym for stink when an experience is bad (as in “This band reeks”). Examples of reek in a sentence include:

How To Remember the Difference

So how can you avoid saying "reeking havoc" in the future? Unless you’re referring to destruction that smells particularly bad, remember: Wrecking balls wreak havoc. As long as you connect wreck and wreak, you should avoid this common error going forward.