Riot vs. Protest: Defining the Differences

Are you wondering how to tell the difference between protest and riot? While both involve public gatherings and speaking out, there is a big difference between a riot and a protest. Learn what you need to know to identify riot vs. protest based on the facts of what takes place at each. 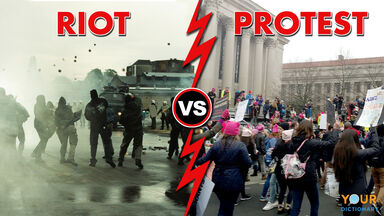 A protest is a forum for publicly complaining about a cause or action with which one disagrees. Protests are peaceful assemblies that involve people coming together to speak out to redress grievances they may have with applicable government officials or bodies. A protest can involve just one person, a few people or an enormous number of people.

"Congress shall make no law respecting an establishment of religion, or prohibiting the free exercise thereof; or abridging the freedom of speech, or of the press; or the right of the people peaceably to assemble, and to petition the Government for a redress of grievances."

Protests often involve topics like civil rights issues, economic policies, social justice issues, or laws that are or are perceived to be unjust. For example, the 2017 Women's March that took place in Washington, D.C. and cities throughout the country and the world, is an example of a protest. There are many modern examples of civil disobedience.

There is a big difference between a protest and a riot. Like a protest, a riot involves an assembly of people who share a common purpose, but that is where the similarities stop. Riots have a few defining characteristics.

Many riots involve political demonstrations. Riots also sometimes take place within prisons or occur as the result of labor disputes that escalate to the point of violence. For example, The Rodney King Riots that took place in Los Angeles in 1992, after police officers charged with assaulting him were acquitted, involved six days of violence, arson and looting. They resulted in 63 deaths, over 23,000+ injuries and 12,000+ arrests.

Key Differences Between a Protest and a Riot

The subject matter has nothing to do with whether an assembly is a protest or a riot. The issue is what actions take place during the event. If the event starts out or becomes violent, it is not a protest. It is a riot at that point, which means it involves criminal activities.

The legal environment is very different for protests and riots.

The First Amendment applies to protests that take place anywhere in the United States. Some states or other jurisdictions legislate certain activities related to protesting. For example, in 2020 Tennessee passed a law making it illegal to write on public property with chalk or to engage in an overnight sit-in. As of early 2021, the constitutionality of this law has not been challenged.

The International Center for Nonprofit Law (ICNL) publishes a U.S. Protest Law Tracker to help protestors keep up with state or local laws.

Rioting isn't legal anywhere. Each state establishes its own laws that define exactly what a riot entails, what actions law enforcement can take and what the consequences are for rioters. Some cities, counties or other jurisdictions may have their own laws as well.

Focus on What Works

While protesting can be a great way to make sure your voice is heard about issues that matter to you, rioting is criminal activity that should generally be avoided. When your goal is to inspire change, it's important to stay on the right side of the law. For inspiration, review some of the many well-known examples of civil disobedience in history. You might also be interested in learning the differences between sedition, treason and insurrection.