Role vs. Roll: Why One Letter Makes All the Difference

If you're taking roll, are you counting the attendance in a classroom, or are you stealing a small piece of bread — or both? The difference between role and roll is more significant than a small spelling change. One word has multiple meanings, while the other only has one definition and function in a sentence. 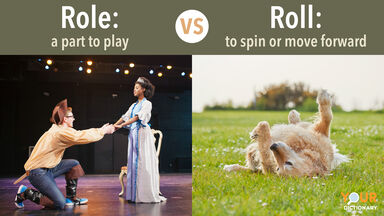 The Difference Between Role and Roll

Role and roll are homophones because they sound the same but have different meanings. Mixing them up is a common error, but confusing these small words can make a big difference.

Unless you're talking about someone's role in a play, a company or a project, you probably want to use the word roll. Chances are, one of its definitions will fit your needs.

Two Words With One Origin

There's a reason role and roll sound so similar. They both come from the Latin word rota, meaning "wheel." Of the two, roll is older and refers to the act of moving in a circular motion, as well as items in the shape of a wheel.

In French, the Latin rota became rolle, referring to a rolled-up piece of parchment or paper. When a piece of parchment contained lines for an actor to read, it was called a roule (or rôle). The English word role, which specifically refers to the part someone plays, comes from this French usage.

Role Has One Definition

The noun role only refers to one's part or position in a group. Traditionally, role described an actor's part in a play, but it also applies to one's position in a company or group project. The duties that the person performs in their role are known as responsibilities.

Examples of role in a sentence include:

If you're not talking about someone's position, you probably want to use the word roll. Like role, roll can function as a noun, but it's most commonly used as a verb in sentences.

Using Roll as a Noun

When functioning as a noun, roll can refer to "material that has been rolled up into a cylinder or ball." For example:

Another use of roll as a noun is to describe the act of rolling. For example:

Finally, roll can mean "a list or catalog" (from the act of unrolling a scroll to read a list). For example:

Using Roll as a Verb

The verb form of roll can indicate the act of spinning (as in the movement of wheels). Examples of roll functioning as a verb in this context include:

When combined with the preposition up, roll can describe the act of rolling something flat into a cylinder shape. For example:

Idioms and Expressions With Role and Roll

One reason for the confusion between role and roll is that both words appear in many common idioms and expressions. However, as in everyday usage, roll appears in more expressions than role.

For example, you spell the word role when describing:

However, the word is roll in these contexts:

Is It Roll Call or Role Call?

One of the trickier instances of role vs. role is in the term "roll call" (or "calling roll"). It refers to the act of counting attendance in a class or group by reading from a list of names. Many people think that the phrase should be "role call." However, from the definition of roll that means "list," the phrase should be spelled "roll call." Spelling it "role call" is incorrect.

It may seem like the difference between role and roll is so insignificant that mixing them up doesn't matter. However, once you realize that role has only one meaning and roll has many, it should be easier to tell them apart. For more small words with big differences, check out a guide to fair vs. fare.