Root or Route or Rout, Oh My! Picking Them Apart

Root vs. route is the root of many grammar mistakes. Now add in rout (and router), and you’re taking a quick route to a bad headache. Don't let these words rout you; it's not too hard to route their vocabulary roots. (We couldn’t resist.) 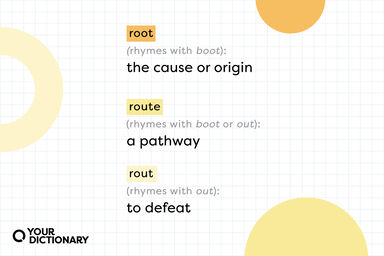 Root vs Route vs Rout definition and tips for remembering
Advertisement

Meaning of “Root”: The Cause or Source

Root (rhymes with boot) means “the cause or source of something.” It functions as a noun most of the time but also has a verb form and an adjective form.

How To Use “Root” as a Noun

The noun form of root comes from the Latin radix and the Old English rōt, meaning “origin.” Root can relate to the underground system of roots that sustain a plant, or the underlying issue of a problem. It can also mean “to plant firmly” in idioms like take root. For example:

How To Use “Root” as a Verb

As a verb, root has a few different meanings. From the Middle English wroten, to root means “dig” — either literally (such as pigs rooting for truffles) or figuratively (such as a person rooting for information).

Additionally, it can mean “to cheer for” a team or a person (from an obsolete meaning “to work hard”). For example:

How To Use “Root” as an Adjective or Participial Adjective

When used as an adjective, root means “pertaining to a root.” It can also be a participial adjective (rooted) to describe something planted deeply. For example:

Meaning of “Route”: A Pathway

Route means “a path to follow.” It’s often confused with root because of their pronunciations, which are the same in the United Kingdom, France, and even many parts of the United States. In some areas of the U.S., however, route is pronounced “rowt” (rhyming with out).

Using “Route” as a Noun

Using route to describe a pathway comes from the Old French rute and Latin ruptus, which mean “a road broken open” — similar to ruptured.

Using “Route” as a Verb

The verb form of route means “to set a route” or “to send in a direction.” For example:

Meaning of “Rout”: To Defeat

It’s always pronounced “rowt,” and when written in a verb form, it’s a homonym with route — but instead of “a path,” it means “to cause someone to retreat” or “to defeat soundly.”

When To Use “Rout” as a Verb

Unlike root and route, rout is most commonly used as a verb. For example:

When To Use “Rout” as a Noun

You can also use rout as a noun when referring to a defeat — or, in an older sense, a group of people who defeat others. For example:

The word router and its pronunciation is another source of confusion. It refers to two things:

When referring to the networking device, router comes from the word route (because it routes computer data into different directions). It has two different pronunciations: “ROW-ter” in American English, “ROO-ter” in British English.

But when router describes the wood tool (which cuts wood away from a main piece of wood), it’s pronounced “ROW-ter” everywhere because it comes from rout — “to destroy.”

Tips for Remembering the Difference Between “Root,” “Route,” and “Rout”

If you’ve made it this far, use these tips the next time you’re stuck between root vs. route (and rout):