Setup vs. Set Up: An Introduction to the Differences

If someone framed you for a crime, were you setup or set up? It may not seem like there's a big difference between these words, but there is—and it's even more than one little space. Take a look at setup vs. set up, including their definitions and different functions in a sentence. 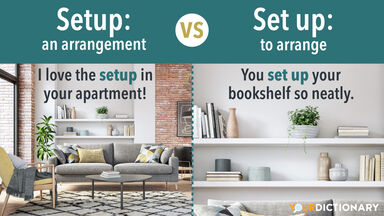 Setup and Set Up Are Different Words

While setup and set up both refer to arrangements of some kind, they're not synonyms. In fact, they function quite differently in a sentence.

Setup refers to a situation that was previously arranged. It functions as a compound noun when it comes after an article (such as the or a), and it can also function as a compound adjective when it modifies another noun in the sentence.

How to Use Setup as a Noun

The noun function for setup can refer to any number of pre-arranged situations. It's a common term for a date that was arranged by someone else, the process of getting ready for an event, or getting an electronic device up and running.

How to Use Setup as an Adjective

When you use setup as an adjective, it modifies another noun but still refers to a pre-arranged situation. For example:

If setup looks like a typo, you may be used to the hyphenated version: set-up. This spelling is more common in British spelling, while setup is more common in American spelling. Neither way is incorrect as long as you're using it as a noun or adjective.

Set Up Meaning: To Make Arrangements

Set up is a phrasal verb that means "to arrange" or "to make arrangements." In other words, a person can set up a setup. Set is an irregular verb that is the same in both past and present tense and only changes in progressive tenses (setting).

Examples of set up in a sentence include:

You can also use set up with the direct object between set and up. For example:

Tips on Keeping Setup vs. Set Up Straight

If you know how you're using the word in a sentence, you should be able to keep setup and set up straight. But if their usage gets confusing, follow these tips:

Set Yourself Up For Grammar Success

There are lots of opportunities to bring your writing from good to great. Many of them are as simple as clarifying the difference between confusing word pairs such as setup vs. set up. Learn more about proper usage and avoiding word mixups with a tutorial on apart vs. a part.