She vs. Her: Proper Grammar Use

She and her are two words that mean almost the same thing, but they get used in different circumstances. Their similarities are what make them so hard to differentiate. Learn the proper use of she and her by reading sample sentences. 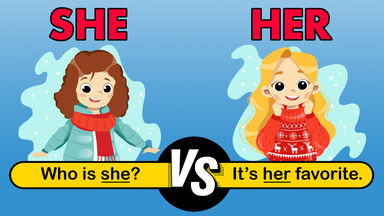 she vs her proper grammar
Advertisement

The words she and her are both pronouns that are used in place of nouns describing females. You can use she or her to replace:

Definition and Use of She

She is a singular pronoun. It is a word that takes the place of a singular noun. Singular means there is one.

The definition of she is:

A female who was previously mentioned

Based on the definition, you could use she when the person you’re talking to knows which female you’re referring to.

Using She in a Sentence

Since she is a pronoun, it takes the place of a female noun.

Definition and Use of Her

Unlike she, the word her can be an adjective or a pronoun. Take a look below for when you should use her instead of she in a sentence.

Her As an Adjective

Her can be used as an adjective when it’s the possessive form of she, meaning you’re showing something belongs to the she you’ve mentioned. The definition of her is:

The possessive form of she

Her As a Pronoun

Her is also a pronoun when it’s the objective case of she, meaning it’s used as the direct object or indirect object of a verb. The definition of her in this case is:

She or a female; form of she used after a preposition or as the object of a verb

Using Her in a Sentence

When you are saying that something belongs to the female, you’ll likely use her. The word her as a pronoun often comes after a preposition, or linking word. As a pronoun, her can also be the object of the sentence.

She vs. Her Worksheet

Practice what you’ve learned about using she and her by completing the sentences below with the correct word. Check your answers when you’re done to see if you’ve mastered these grammar rules.

Fill in the blanks with either she or her to complete each sentence correctly. The answers are at the bottom of the article.

She Knows Her Grammar

Once you’ve mastered using she vs. her, it’s time to learn when to use he vs. him. Since they are similar concepts, they should be easy for you to understand.