Snuck vs. Sneaked: A Look at the Correct Usage

Should you say sneaked or snuck when describing sneaky events of the past? It depends who you ask. Some say that sneaked is the proper past-tense form of sneak, while others prefer snuck. Both are correct — but only sneaked is always acceptable. 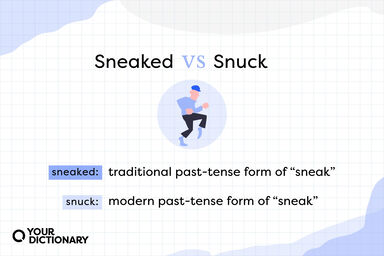 ‘Sneaked’ Is the Safer Option

If you’re trying to decide between snuck and sneaked, you’ll never go wrong with sneaked. Like other regular verbs that end in -eak, such as tweak (tweaked) and squeak (squeaked), adding -ed to sneak is an acceptable way to put it in the past tense.

It’s also the more traditional way to conjugate sneak, which comes from the Middle English sniken, meaning “to creep or crawl” (just like snake). Sneaked appeared in English in the 16th century and was the only way to refer to past-tense sneaking.

Examples of ‘Sneaked’ In a Sentence

You may prefer sneaked if these sentences look correct to you:

Is Snuck a Word?

Even though sneaked is the preferred and traditional choice, snuck is not technically incorrect. After centuries of use as a regular verb, sneak’s irregular conjugation snuck appeared in English in the 19th century. The word quickly became a common way to describe previous sneaking, and today, it’s more popular than sneaked.

Snuck didn’t come out of nowhere. While tweak and squeak are conjugated as regular verbs, other words that end in –eak (speak and break) have irregular past-tense conjugations (spoke and broke).

Examples of ‘Snuck’ In a Sentence

If you’re a fan of snuck, these sentences may look better to you than the previous examples:

Snuck or Sneaked: When Formality Matters

While snuck is a perfectly acceptable word, it may not always be the best option. You should opt for sneaked when:

Generally speaking, you can’t go wrong when you choose standard terminology when writing a formal document. But not all writing is formal. If the document or story you are writing is informal or includes natural-sounding dialogue, then you may want to choose the word snuck.

‘Sneaked’ Is Traditional, ‘Snuck’ Is Modern

While teachers, editors and style guides prefer sneaked, it can sound a little clunky in modern speech. That’s because sneak, like many other English words, has evolved over time. But sneak is unique because it has two grammatically correct past-tense forms, rather than one. In the end, it comes down to your preference and word choice.