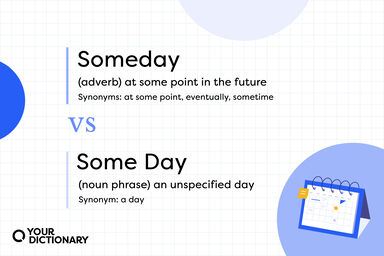 Definitions of "someday" and "some day" with examples from the article.
Advertisement

Both someday and some day are correct in different contexts. However, they’re not interchangeable.

Like sometime vs. some time, adding a space between some and day makes these words different parts of speech. Because they function differently in sentences, they have different meanings.

Use “Someday” To Talk About the Future

Someday is an adverb of time that refers to the future. You use it when describing any general time after today.

Synonyms of someday include:

Examples of “Someday” in a Sentence

You’d use someday when talking about an event that may happen. For example:

Use “Some Day” To Talk About A Day

Some day is a noun phrase that refers to an actual, unspecified day. “I’ll clean my room some day next week” is more promising because the room will likely get clean in the next seven days.

Some functions as a determiner that modifies the noun day, just like the indefinite article a. To determine whether you’re using some day correctly, replace it with a day.

Examples of “Some Day” in a Sentence

Unlike someday, you use some day the same way you’d use a noun. You could replace some day with a day, or Wednesday, or any other noun that names a day.

What About “One Day”?

Like some day, one day is a noun phrase (the determiner one modifies day). But one day is also an English colloquialism meaning “in the future” — just like someday. So how do you use it?

You’re more likely to see one day as a way to reference a time in the future, especially one that’s more specific than someday.

However, you may also see one day as a noun phrase like some day when specifically talking about a single day.

It depends on the sentence. You can use one day as a (more specific) substitute for some day:

Someday My Hints Will Come

Someday vs. some day is just one example of commonly confused words caused by a single press of the space bar. Need more hints to keep these words straight? You’ll find many more very similar — but also different — word pairs that follow the same pattern.