Sometime vs. Some Time: Use the Right Word All the Time

When you're making plans with someone, you may ask them to meet up sometime. Or is it some time? Only one space separates these words, but they function in very different ways in a sentence. Learn about their differences and how to use them, as well as how sometimes fits into the situation. 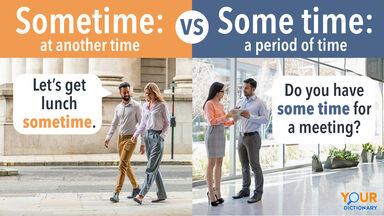 Businessman and businesswoman talking Sometime vs Some Time example
Advertisement

Telling Sometime and Some Time Apart

Both sometime and some time refer to time but in different ways. Their difference is seen in their definitions.

These differences only exist in American English. In British English, some time can mean both "at another time" and "a period of time."

When to Use Sometime

You can use sometime when you're saying "at some point" in the past or future. It has two functions: as an adverb and as an adjective.

How to Use Sometime as an Adverb

The most common usage of sometime is as an adverb of time. It explains when something happened or will happen by modifying the verb in the sentence. For example:

How to Use Sometime as an Adjective

A less common way to use sometime is as an adjective. In these cases, it means "former" or "occasional," and it always comes before the noun it describes. For example:

When to Use Some Time

The noun phrase some time only functions in one way. The adjective some describes the noun time to refer to an undetermined amount of time. When you mean "a little time," you usually emphasize the time part of the phrase when speaking (some TIME). For example:

Some time may also mean a long amount of time, especially when it's used in a prepositional phrase. In these cases, you mean "a long time," and you emphasize the some part of the phrase (SOME time). For example:

So how does the word sometimes fit into these definitions? Unlike the adverb of time sometime, sometimes is an adverb of frequency that indicates how often something happens. It means "occasionally" or "from time to time." For example:

Spend Some Time on Grammar

Grammar can be hard to understand sometimes. Luckily, once you figure out the differences between words such as sometime and some time, your writing improves very quickly! Master more confusing word pairs by studying up on passed vs. past. You can also get a handle on the difference between anyway vs. anyways.