Stationary vs. Stationery: Know Which Word to Use

The words stationary and stationery are homophones. That means that these two words sound the same when spoken, but don't mean the same thing or have the same spelling. Discover when to use stationary vs. stationery so you'll be prepared to use the correct term the next time you need to include one (or both!) of these terms in something you are writing. 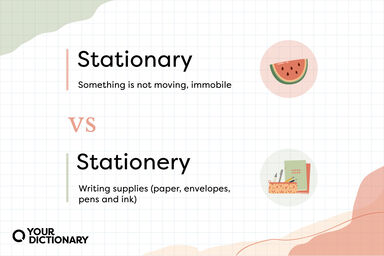 What Does Stationary Mean?

The word stationary, with an "a" in the final syllable, is used to indicate that something is not moving. It refers to a condition that is staying the same, without changing. This term means the same thing as immobile.

Examples of Stationary in a Sentence

To develop a further understanding of what stationary (with an "a") means and how to use it, review these sample sentences. Note that each of these usages refers to something that stays still, without moving.

What Does Stationery Mean?

The word stationery, with an "e" in the final syllable, is used to refer to supplies used for writing, typing or word processing. It is most commonly used to describe paper and envelopes used for this purpose. It can also include pens, ink and other basic writing supplies.

Examples of Stationery in a Sentence

To reinforce your knowledge of how to properly use stationery (with an "e"), consider these sample sentences. Notice that each of them refers to items used for writing or printing, or places where such items can be purchased.

Knowing the definitions of stationary vs. stationery is important, but you also need to be able to make a quick decision regarding which term to use when you are writing.

Use these mnemonic devices to quickly recall when to use the word stationary.

There are also a few basic memory strategies to help you know when to use stationery.

Looking at the usage of stationery vs. stationary grammatically can also help you tell which one is correct in that specific context.

In spoken communication, no one will know if you are using the correct term or not, because there is no difference in how these words sound when said aloud. When writing, though, it is very important to choose the correct term, to avoid making a language usage and/or spelling mistake.