Is It “Stupider” or “More Stupid”? Why It’s Not a Dumb Question

Ancient texts speak of a sacred ritual wherein boys go to Jupiter to get more stupider, while girls go to Mars to get more candy bars. Records of this event remain under constant investigation even today, but it does bring up one of the most timeless questions: Is it stupider or more stupid? In reality, both are correct. Coincidentally, “more stupider” isn’t correct. 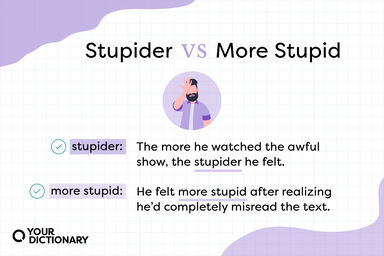 Which Is Correct: "More Stupid" or "Stupider"?

Both more stupid and stupider are grammatically correct. They are largely interchangeable in their usage, and the one that you choose comes down to personal preference. If you want to save a few characters, you can go with stupider. If you want to increase your word count, go with more stupid.

Trends suggest that more stupid is the more common of the two terms worldwide.

What Does "Stupid" Mean?

Stupid is an adjective that refers to having or exhibiting a lack of common sense or general intelligence. It’s kind of mean, kind of rude, and it comes from the French word stupide, which originally meant “paralyzed” in the late 14th century before evolving to mean “foolish, unintelligent.” That French word is rooted in the Latin word stupidus, meaning “dazed, numbed, or stunned.”

Much of the confusion about stupider and more stupid comes from the fact that there aren’t really any set rules for two-syllable comparative adjectives. Some allow you to simply add -er to an adjective (which may also include changing a final "Y" to "I" first):

Others require you to add the word more before the adjective:

For even further confusion, some adjectives allow you to go either way:

That’s where stupider and more stupid fall in. While both are correct, remember that you can only choose one. More stupider is not grammatically correct.

Which Is Correct: "Most Stupid" or "Stupidest"?

Similar to stupider and more stupid, both stupidest and most stupid are grammatically correct. The one you choose largely comes down to what you want.

Unlike stupider and more stupid, stupidest appears more commonly than most stupid throughout all texts.

“Stupider” Is a Word, but “Funner” Is Not (Technically)

At the other end of the spectrum, you have funner and more fun. With most single-syllable adjectives, you form the comparative by adding an -er. Fun is one of the exceptions, and despite what your colleagues at the playground might have told you, funner is not a generally accepted word.

It’s hard to say exactly why, but part of it might come from the strange evolution of the English language. Fun is and has been (for most of time) a noun referring to a thing that is amusing or entertaining. It wasn’t until around the early 1800s that people began to use fun as an adjective. As a noun, saying funner or funnest would be like saying butterflier or butterfliest.

However, conventions do change, and some people are allowing the use of funner and funnest, albeit as nonstandard forms. For any formal applications, you should stick with more fun and most fun.