Supper vs. Dinner: Why They’re Not Really the Same

Nothing beats a hot meal at the end of the day, but depending on where you live, you might hear that meal referred to as dinner or supper. Dinner was originally used to indicate the main meal of the day, while supper referred to a lighter meal eaten later. Today, dinner refers to the evening meal, while supper may refer to lighter or more informal meals. Knowing the difference ensures that you get fed. 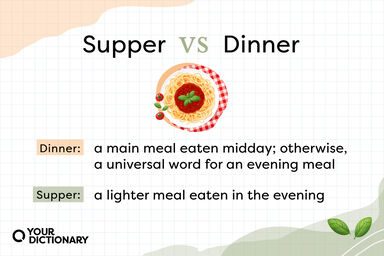 The Difference Between Dinner and Supper

Although some people use them synonymously, dinner and supper can have their differences depending on generation and region, especially in England, Canada, and the Midwestern and Southern U.S.

People who ate a large dinner in the middle of the day would typically eat a much smaller and lighter meal in the evening. This meal was referred to as supper, from the Old French term soper, meaning “an evening meal.” Dining habits changed during the 20th century, largely due to the shift away from an agrarian economy brought on by the Industrial Revolution.

The Shift to Dinner

With more and more people working factory jobs outside of the home, the practice of eating the main meal during the day became less and less common. Instead, people started to shift their main meals to the evening during the 20th century.

It became more common to use the word dinner to describe the evening meal. The word lunch became the preferred word for a noontime meal.

The term supper became much less common as the Industrial Revolution wore on, but the word did not become obsolete. In most parts of the U.S. and Canada, for example, the words dinner and supper are considered synonyms for one another. In some places, the term supper is still the preferred term for the evening meal, even if it is consumed as the main meal of the day.

While people often tend to relate the term supper with certain regions, this terminology is really more based on generation than region. Those who were raised in families where their parents or grandparents picked up lasting speech patterns from their family's elders, then passed on those patterns to the younger generations, are more likely to have been exposed to the word supper than others.

The places where supper remains in common use are also among the last to see a significant impact from the Industrial Revolution, meaning it took longer for dining habits to change. These are also areas where there is a strong history of colloquial terminology being passed forward over multiple generations. Consider where you are when deciding which term is likely to be most appropriate.

Supper vs. Dinner in the South

Supper remained in common use throughout the Southern United States long after the evening meal became the main meal of the day. Over time, habits changed and the term dinner also became common. In the 21st century, supper has been largely replaced by dinner, but some Southerners do still regularly use the word as they were initially intended.

Supper vs. Dinner in Canada

Supper vs. Dinner vs. Tea in England

The English include the word tea to refer to their evening meals. While dinner remains the more commonly used word, over a third of Englanders use tea, especially those living in the north. Supper is sometimes used for the evening meal, but not nearly as often as tea or dinner.

The most common usage of supper in England is in reference to a light evening snack seated after tea or dinner has already been consumed. For example, a small meal just before bedtime might be called supper.

Off To Bed Without Your Supper

The shift from dinner to supper is an interesting cross-section of American history and regionalisms. Knowing the difference ensures that you know when to wear a tie and how much food to expect.