In the 20th century, most work happened in a synchronous manner. But now, in the increasingly virtual 21st century, work can be synchronous and asynchronous, making it easier to plan your work around your life (instead of the other way around). So what’s the big difference between synchronous vs. asynchronous — and why does it affect your work-life balance so much? 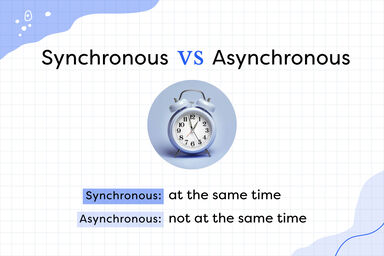 Synchronous: Happening At the Same Time

The word synchronous (SINK-kron-us) means that events are happening at the same time. It comes from the Greek roots syn (together) and khronos (time), as well as the Latin synchronus, and is a time-specific synonym of the word simultaneous.

Another way to think about the word synchronous is that it happens in real time, or live. It requires careful scheduling and communication with colleagues, and typically happens during work or school hours.

‘Synchronous’ In a Sentence

You can use the adjective synchronous any time two or more events occur at the same time. For example:

When you add the prefix a- (“not”) to synchronous, you get asynchronous — “not happening at the same time.” While most of your communication 20 years ago was synchronous, today the majority of it is probably asynchronous. When you text a friend in the morning and they text you back three hours later, that’s an asynchronous conversation.

‘Asynchronous’ In a Sentence

Use asynchronous (or the adverb asynchronously) to describe any events that happen at different times. For example:

Other Timely Words To Know

Synchronous and asynchronous aren’t the only words that use the root chron- to indicate time. You’ll also find it in:

Make Time For Improving Your Vocabulary

Are there a few more word pairs that you mix up from time to time? Memorize their differences once and for all with: