Systemic vs. Systematic: Simple Breakdown of the Difference 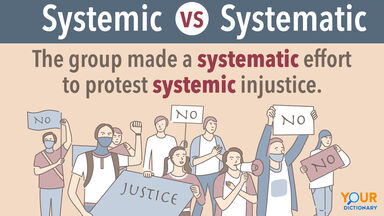 Systemic vs. Systematic: Definitions and Differences

While both systemic and systematic can be defined as relating to a system, their uses are different and serve distinct purposes.

Examples of How to Use Systemic

The word systemic can be used in a variety of contexts. The term is defined as something fundamental to a social, economic or political practice. In other words, it is something that happens within a system, affects the system and is an integral part of the system.

Systemic can also refer to the systems of your body: the circulatory system, nervous system, digestive system, etc. Systemic anatomy is an observation of groups of structures that work together to perform bodily functions.

Examples of How to Use Systematic

Systematic is the older of the two words, as well as the more commonly used. Systematic can refer to behavior that is recurring or habitual and appears to be part of the system. Something this is systematic is intentional and according to a plan.

How to Remember the Difference Between Systematic and Systemic

Even knowing the definitions of systemic and systematic, the meanings are still very easy to confuse or use interchangeably. By looking at the words side by side, the differences in how they are used can be more clearly understood.

Now that you know the difference between systemic and systematic, you can explore other deceptively similar words like infer and imply and desert and desert. If you systematically study these terms, you’ll be able to tell the difference in no time.