You hear a door creak open even though you’re home alone. You wake up to the sound of footsteps. You’re in the basement when the lone bulb above you burns out, drowning you in darkness. These are scary moments, but do they fill you with terror or horror? 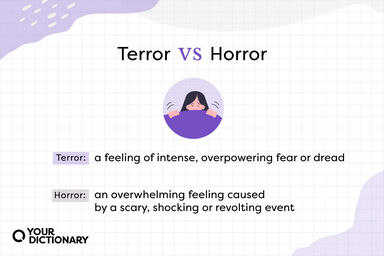 Terror is a feeling of intense, overpowering fear. A person, place or thing can also “be a terror,” meaning they instill a sense of intense fear in others. In a more casual sense, a terror can refer to a generally troublesome or annoying person.

Terror is also tied to terrorism, which involves violence or threats of violence as a means of coercion and intimidation.

The word terror comes from the Latin root terrere, meaning “to frighten or fill with fear.”

Horror refers to overwhelming feelings caused by something scary, shocking or revolting. In more casual or informal applications, something can also “be a horror” if it’s tasteless or ugly.

Terror vs. Horror: How To Tell the Difference

Going by the above definitions, you can see that terror and horror are difficult to untangle because they’re both related to fear. It’s a fine line, but the difference comes down to timing.

Terror comes before the action. You feel terror from anticipating something dreadful that you believe might happen. Horror comes after you have experienced the thing that has happened.

Examples of Terror and Horror

To see your own fears in action, here are some examples to help you differentiate between terror and horror:

Horror As a Genre

Most people know horror as a genre in literature, film and other media. Scary stories are deeply rooted in oral traditions that are centuries old, though some people cite Horace Walpole’s The Castle of Otranto as the first published horror story in 1765.

The horror genre includes countless subgenres, from slashers to paranormal fiction. The intent is to cause fear, disgust or dread, much of which comes from terror and anticipation.

Horror and terror play integral roles in art, literature and everyday life, and sometimes it’s just plain fun to get your socks scared off. But it’s okay, you can calm your nerves with some soothing articles: