“Theatre” vs. “Theater”: Which Is Correct?

Nothing beats a bag of popcorn covered in a butter-flavored topping, cushy seats, and a giant screen showing your favorite movie. We all know that sticky floors coated in centuries of candy and spilled soda are part of the modern theater experience. Unless you’re used to British English, in which case it’s the theatre experience, and it might not be the same thing that you’re thinking of. 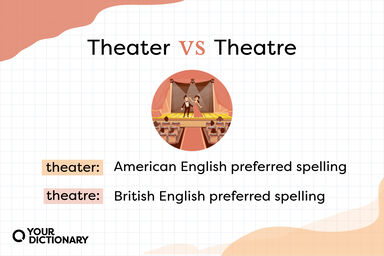 Which Is Correct: “Theatre” or “Theater”?

Both theatre and theater are different spellings of the same word. Theater happens to be favored by people who use American English.

Theatre is more common among British English speakers, which includes Canadians, Australians, and people in the U.K. Essentially, if you’re outside of the United States, you’re more likely to see theatre.

How To Pronounce “Theatre” and “Theater”

Despite the rearrangement of the “E” and the “R,” theatre and theater are both generally pronounced the same way: “THEE-uh-ter.” However, that pronunciation can vary within regions as well.

In American English, some people will swallow that second syllable, giving a pronunciation closer to “THEE-ter” or “THEE-der”

That can understandably be confusing, considering you have words like eater (ee-ter) and eggbeater (egg-bee-ter) that look like they should rhyme with theater.

How To Use “Theatre” and “Theater”

If you use British English or you’re writing somewhere other than the U.S., you should stick with theatre.

In the U.S., you should almost always use theater in your writing. However, there are numerous theaters, usually of the smaller, independent variety, that use theatre in their name. In that case, refer to that specific venue by their chosen name.

Interestingly, the internet seems to prefer theater over theatre.

What Do “Theatre” and “Theater” Mean?

Theatre and theater are nouns that initially referred to large, open-air facilities designed for viewing plays and other spectacles. Most modern theaters have done away with the open-air feature, but they otherwise serve the same purpose, including stage entertainment and movies.

Theatre and theater can also refer to the dramatic arts in general or the theatrical profession.

Word Origins of “Theatre” and “Theater”

Theater and theatre originate from French theatre and Latin theatrum, referring to a venue that showed plays, a stage, or the spectators in the theater. The Greek root is theasthai, meaning “to behold.”

Interestingly, most all other Romance languages also place the “R” before the vowel, as in Italian teatro and Portuguese theatro.

The Real Differences Between the Theatre, Theater, and Cinema

One confusing usage problem with theatre and theater is that it can refer to both stage plays and the place where movies get shown. That can be troublesome when someone says, “Hey, let’s go to the theater/theatre,” and you’re prepared to watch the next great action movie but end up sitting through a live stage performance of Waiting for Godot.

To differentiate, both American and British English users might attach the word movie before theater or theatre, so you get something more specific, like “Let’s go to the movie theater.”

Theatre and theater aren’t the only words that flip the last two letters between British and American English. You can see that change from -re to -er in words like fiber, center, and liter, which are spelled fibre, centre, and litre in British English.

That change is believed to have come in the late 18th century as a means of differentiating American English from British English. Interestingly, you can still see remnants of those British spellings in words like ogre and acre.