Then vs. Than: Keeping the Difference Straight

If your spellcheck program always underlines then and than for you, you're probably mixing them up quite a bit. How can you keep these similar-sounding words straight? Use a few tips and sample sentences to help you choose the right word every time. 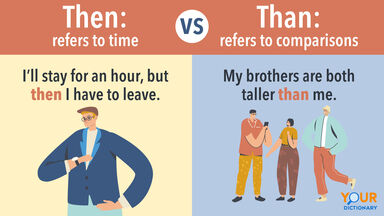 Then - Man checking watch vs Than - Three brothers
Advertisement

How to Choose Then vs. Than

Then and than sound alike, but they're very different words with different meanings.

Memory Tip for Then vs. Than

Using then instead of than is a common (but avoidable) grammar error. Just think of what the word is referring to in the sentence: is it time (then) or comparisons (than)?

Using Then in a Sentence

You'll see then more often than than in writing and conversation. That's because it's more versatile. Then functions as an adverb, a noun and an adjective that refers to a point in time.

Examples of Then as an Adverb

When you use the word then as an adverb of time, it indicates that one event follows another. For example:

Then can also function as a conjunctive adverb (also known as a linking adverb). It connects two ideas or clauses in sentence, just like a conjunction, but it also modifies the sentence like an adverb. For example:

Examples of Then as a Noun

When then functions as a noun, it's typically the object of a preposition. This usage of then signals a point in time. For example:

Examples of Then as an Adjective

Less commonly, you may see then used as an adjective. In these cases, it's part of a compound adjective to describe a condition or position that used to be true but it's anymore. For example:

Using Than in a Sentence

Writers often use then instead of than when they're comparing things, mostly because then has more functions than than. Than has only two usages: preposition and conjunction.

Examples of Than as a Conjunction

Than can function as a conjunction when it links two clauses or phrases together. In these cases, you use a subject pronoun after than. For example:

Often, writers leave the second verb out of the sentence (“Both of my brothers are taller than I”). This usage is correct, but it can sound incorrect to some people. That’s when you have the option to use than as a preposition.

Examples of Than as a Preposition

Than functions as a preposition when it modifies a comparative adjective or another part of the sentence. Any pronoun that comes after than would then be an object pronoun. For example:

You can also use than as a preposition to compare two ideas or nouns with more, fewer or less. For example:

Learn More Than You Knew Before

The key to stronger writing isn't writing perfectly — it's learning the nuanced differences between words and choosing the right one. Once you know then vs. than, your writing will be that much more understandable. Practice adding more to your vocabulary with a look at the difference between using the phrases "different from" and "different than."