There Is vs. There Are: Choosing the Right One

According to subject-verb agreement, you use singular verbs for singular subjects and plural verbs for plural subjects. Now forget all that. When a sentence begins with there (also known as the existential there) the subject isn’t singular or plural — it’s just there. So how do you decide when to use there is or there are in a sentence? 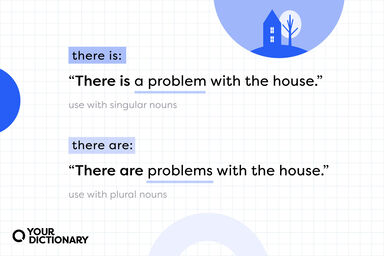 House With There Is or There Are Definitions and Examples
Advertisement

Use “There Is” for Singular Nouns

If the noun that follows there is or there are is singular, use there is. Technically, the noun is the object of the sentence, since there is the subject. For example:

Notice the determiner, such as a or one, when the noun is countable (student, coyote, issue). You can replace these determiners or add adjectives — for example, “There is another new student in class today” — and the sentence still uses there is.

When the noun is uncountable (smoke), you don’t need a determiner after is, but you can add one anyway (“There is so much smoke in the air.”)

When writing informally, you can use the contraction there’s instead of there is:

Use “There Are” for Plural Nouns

When the noun in the sentence is plural, use there are. For example:

Because all plural nouns are countable, you can use determiners between there are and the plural noun. For example, “There are many ways to solve the problem” still uses there are.

If there’s is okay to use, what about there’re? It is an actual word, so an editor (or a spellchecker) wouldn’t get upset. But when you say it out loud — “There’re boats on the water” — you may opt for the more pronounceable there are.

Using the existential there seems tricky when you’re also using indefinite pronouns (such as some, a lot, and any), especially when asking a question, After all, both “Is there some left?” and “Are there some left?” sound correct, so which one should you use?

The answer still lies in the noun that the pronoun is replacing. To find the correct usage, simply add the noun back into the sentence.

For example, cake is uncountable, making it singular. If you add cake to “Is there any left,” you get:

You can use the same method for some, a lot, and more, as well as any indefinite pronoun that could describe an uncountable noun or a plural noun.

What About Collective Nouns?

Those are the basics of there is and there are. But what on Earth do you do with collective nouns like variety, a number, or a collection, which are usually treated as singular nouns, when the nouns they’re describing are plural?

Some collective nouns simply sound better with there is:

However, other collective nouns sound odd if you don’t use there are:

If you can’t rewrite the sentence to be less ambiguous, use your preference (or spellchecker) as your guide. Both uses are grammatically correct, but usually, one sounds better than the other.

Is It Bad Writing To Say “There Is” or “There Are”?

Some people consider the existential there to be an example of filler writing, which can make your writing sound weaker. Consider these two sentences that say the exact same thing:

Rewriting sentences that begin with there is or there are makes your writing stronger — and it gives you the opportunity to use more active verbs (“Three songbirds chirped happily in the backyard.”) It’s an easy way to improve your writing — and avoid potential grammatical errors, such as mixing up their, there, and they’re, in the future.