This vs. That vs. These vs. Those: Basic Grammar Guide

You know how to use articles like a, an, and the. But what about words like this and that? Or these and those? Read on for examples of sentences that use this or that, and with phrases like these are and those are. 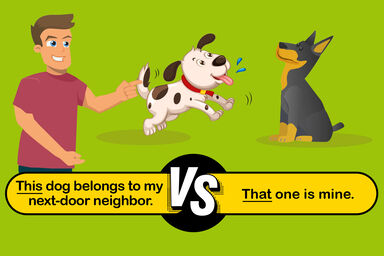 Use of this and that
Advertisement

This vs. That, These vs. Those

Telling the difference between these words may seem easy for English speakers. But do you know the various situations where each is correct? This and its plural version these have slightly different meanings and uses from that and those. So, where do we use this, that, these, and those? It has to do with the items you're describing.

One difference between these words lies in distance and number. If an item is close to you, you use the word this. If there is more than one item that is close to you, use these. This rule applies to time as well: current events use this. For example:

When something is not very close to you, use that. Just like in the first example, use those when more than one thing is far away from you.

Another way this/these and that/those are different are in introductions. When you want to introduce someone to another person, you use this (or these for more than one person). You also use this when identifying yourself on the telephone. Check out these example introductions:

You would typically only use that or those when talking to someone about another person. For example:

When you are describing two groups of people or things, you can use this and that (or these and those) to differentiate between them. For example:

In some cases, one item may be closer to the speaker than the other. But in others, this and these are simply the first items mentioned, and that and those are in the second group.

This, that, those, and these are known as demonstratives. But are they demonstrative pronouns or demonstrative adjectives? The answer is both – depending on how you use them in a sentence.

Remember: Use this, that, these, and those to replace objects in noun phrases that describe objects only. Pronouns for people include he, she, and they.

You’ve learned that adjectives are words that describe or modify nouns. When you use this, that, these, and those to modify nouns, they’re known as demonstrative adjectives. You are talking about this dress or that dog, not another one.

I love your idea to share a hot wings appetizer.

“Your idea to share a hot wings appetizer” modifies the noun “idea.” If you replace the entire noun phrase, it creates this sentence:

While technically correct, the sentence is confusing. Does the speaker love the idea, or do they just love hot wings? In this case, modifying the noun rather than replacing it can be helpful.

I love that idea.

Because this, that, these, and those are supposed to clarify your nouns, it’s best to use them correctly. When in doubt, read it out; if it sounds right, it probably is.

Have you got the hang of it? If you’d like more practice, test your knowledge with a demonstrative adjectives quiz. You can also take a look at some demonstrative pronoun worksheets that are sure to challenge your grammar skills.