Titled vs. Entitled: The Right Way to Use Each Word

Is the book titled or entitled? If someone calls you entitled, should you be insulted? If you’re asking these questions, you are not alone. Explore the distinction between titled and entitled and how to use them in a sentence. 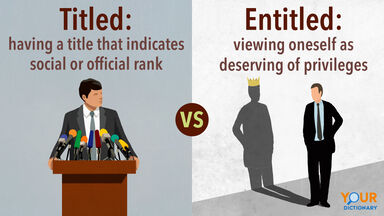 The Difference Between Titled and Entitled

Not only do titled and entitled look and sound similar, their meanings are also easy to confuse. Memorizing their meanings will help you clear up the confusion.

Although their meanings differ slightly, both titled and entitled can be used when naming a work of art, books, movies, etc.

Meaning and Uses of Titled

Titled means "to be given a title that signifies a certain official or social rank." It can also apply to the name of a song, book, movie, or other work of art.

How to Use Entitled

Entitled is an adjective that means “having the right to something.” It often carries a negative connotation because it can refer to "viewing oneself as deserving of certain privileges due to social rank, ability or perceived superiority." It also means "to give a title to something."

Do You Title or Entitle Your Book?

The confusion here is understandable because technically both titled and entitled are correct when it comes to naming a work of art. However, some people take a definitive stance on whether titled or entitled is correct in this instance.

The Associated Press states that entitled means “the right to have something” while titled means “to give a title.” In contrast, some sources including The Washington Post have made arguments for the use of entitled, citing that it has become increasingly popular and synonymous with “meaning.” Ultimately, since both titled and entitled mean “named” or “called,” you can use either when naming something.

It’s easy to confuse words like titled and entitled as people continue to argue about correct usage to this day. Explore similarly confused words like enquire and inquire or preventative and preventive.