Toward vs. Towards: Ending the Confusion

Have you ever typed the word toward and wondered if you should have spelled it towards? This preposition can be confusing — but it doesn't have to be. Keep reading to learn more about when you should use toward vs. towards and whether the difference between the words is bigger than an "s." 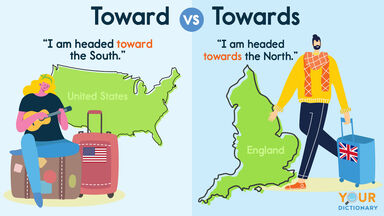 toward vs towards sentence examples
Advertisement

Toward or Towards: Which One Is Correct?

When they're used as prepositions, which is usually the case, both words are technically correct.

The preference is the same as many British vs. American spelling conventions. English speakers in North America tend to prefer toward, while countries that use British spelling prefer towards. It just depends on what sounds most correct to the speaker or writer. Toward is more commonly used in the United States and Canada, while the U.K. and Australia use towards. Other countries that speak English as an official language usually vary depending on whether they are taught American or British English in school.

Style Guide Recommendations: Toward Is Correct

When it comes to formal writing, there are some recommendations from different style guides regarding toward and towards. The AP Stylebook recommends that writers use toward instead of towards, as do the Chicago Manual of Style and APA style guide. So if you're writing a formal paper and want to know which word to use, your best bet is toward. This is also the case for other directional words like forward, backward, and downward.

Meanings and Uses of Toward(s)

Both toward and towards are prepositions that mean "in the direction of." They have several meanings but always function as part of a prepositional phrase that includes an object of the preposition.

Toward and towards can indicate literal movement in a direction, such as:

The preposition toward or towards can also show a figurative movement or position between nouns. For example:

Both toward and towards can mean "facing" or "turned to," such as in these sentences:

Another definition of toward and towards is "near." For example:

The last meaning of these prepositions is "in regard to." You'll find this meaning in the following examples:

How to Use Toward as an Adjective

There is one case where you'd always choose toward instead of towards, but it's rare and not commonly used anymore. Toward can be an adjective that means "coming soon" or “approaching." Some examples include:

You wouldn't use towards in these cases. However, using toward as an adjective is a bit old-fashioned and has fallen out of favor, so you're not likely to see it in your reading or daily conversation.

Both toward and towards come from the Old English word tóweard, which has the same meaning as its modern versions. Towards became the dominant spelling around the 17th century, but toward rose in popularity throughout the 19th century. Historically, the “s” at the end of towards indicated that the word was an adverb. However, as a preposition, the “s” doesn't have a grammatical function.

Straighten Up Your Spelling

No matter what goal you're working toward (or towards), you'll be able to write about it without worrying that you've made a grammatical error. However, not every pair of similar-sounding words is quite so interchangeable. Explore more British vs. American English word disagreements such as the difference between whilst and while.