You receive an email that says “I just travelled to Spain,” and you do a double-take. “Shouldn’t it be spelled traveled?” you may ask. It depends on where you are in the world. Discover the difference between the spellings travelled and traveled and how to use them. 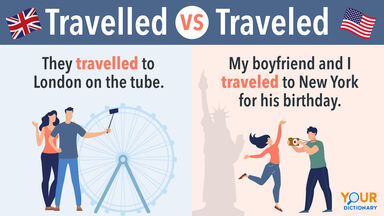 Traveled and Travelled: The Reason for the Difference

In short, traveled and travelled mean the same thing and serve the same purpose. However, traveled is the more popular spelling in American English, while travelled is the preferred British spelling. The reason behind American English favoring one “l” and British English preferring two comes down to Noah Webster, of Webster Dictionary fame. He determined that words like travel only needed one “l” in the past and present participle form.

So the question is not which is correct, but rather who you are writing to.

How to Use Traveled in a Sentence

Traveled is the past tense of the verb "to travel." The one “l” also applies to the conjugation traveling.

Using Travelled in a Sentence

Since travelled and traveled mean the same thing, they serve the same purpose. Travelled is the commonly accepted spelling in places like the U.K., Ireland, Australia, New Zealand, and other countries that study British English.