Unalienable vs. Inalienable: Does the Difference Exist?

The Founding Fathers of the United States wanted to enshrine citizens’ natural rights in the Declaration of Independence. They listed “certain unalienable rights” — life, liberty and the pursuit of happiness — and declared that a government only existed to maintain and protect these rights. But should they have said “inalienable rights” instead? Is there a difference between the two words, and is “alienable” even a real word? 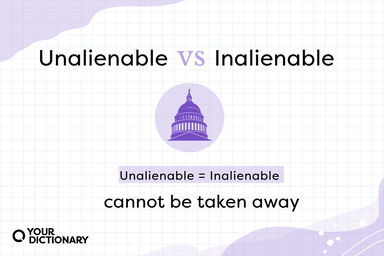 Examples of Inalienable (or Unalienable) Rights

These adjectives usually appear in the context of one’s natural rights as a person — the rights you deserve simply by being a human being in the world. These rights include:

‘Unalienable’ Appears in the Declaration of Independence

As much as people love to argue about what the Founding Fathers really meant in their writing, this one doesn’t need much defense. Unalienable appears in the final draft of the Declaration of Independence because it’s a real word, not an archaic spelling or a misprint. However, even the Declaration drafters disagreed on usage — the spelling varied in earlier drafts before finally landing on unalienable.

But ‘Inalienable’ Is More Etymologically Correct

Additionally, many people choose inalienable over unalienable due to its pronunciation and spelling with two i's. Unalienable may sound slightly harsh in comparison.

So Which One Should You Use?

Both words are similarly popular, so choosing either one isn’t necessarily going to alienate your readers. It depends on which one you prefer. For example:

Can Something Be ‘Alienable’?

All this talk about prefixes can lead one to wonder: If something can be inalienable (or unalienable), can it just be alienable? The answer is yes, if that thing is transferable.

While inalienable and unalienable appear in discussions about human rights, you’ll most often see alienable in property law. For example, a car that you sell to someone else is alienable, as is the house you bought last year or land that you inherited from your uncle. They can be freely given or transferred, unlike your natural rights as a human.