Used to vs Use to: Differences and Grammar Rules

How do you describe an activity that you don’t do anymore? It’s hard to know whether you use to do it, or if you used to do it. Only one answer is correct in this context, while the other option is appropriate in a different sentence. Read on to discover when you should use used to – and when use to is actually the right choice. 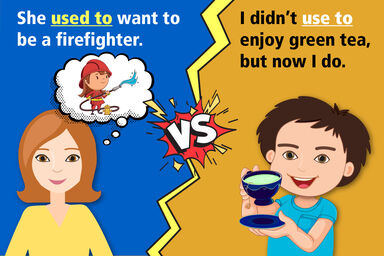 Used To vs Use To Example

Both used to and use to are idiomatic English phrases. Depending on their purpose in a sentence, they can establish an action that no longer occurs or state that the speaker is accustomed to something. Their use changes their part of speech.

Used To as an Adjective

The most common mix-up between used to and use to occurs when describing the feeling of being accustomed to something, or “used to” it. Here are some examples of used to as an adjective. Notice that each of these sentences also includes a form of the helping verb to be (is, wasn’t, are).

Using used to as an adjective is clear cut – always used to, never use to. You’ll noticed that used to is followed by a noun in these examples. “Sleeping” and “staying” are gerunds, words that are formed from verbs but function as nouns.

Someone can be “used to” to a condition or situation, but they are never “use to” it. But, that doesn’t mean there’s no place for use to in a sentence.

Used To as a Verb

Both used to and use to are commonly used as modal verbs, which are a type of helping verb that establishes a sentence’s mood. They both combine with an infinitive (to + verb) to explain that an action no longer happens. Some used to examples include:

These sentences all use used to as past-tense verbs. If you remove used to, the sentences would be in the present tense. They would also have subject-verb disagreement.

Use To as a Verb

Did you used to or use to ride your bike to school? The only correct time to write use to is when you also use the words did or didn’t. These sentences are meant to clarify past behavior. Some examples of correct uses of use to include:

Did and didn’t are already in the past tense form, so you don’t need to add the d to use. A rare exception to this rule is the uncommon contraction usedn’t to, which means “didn’t use to.” However, you’re not likely to use or see the word American English.

So why is there so much confusion around these phrases? The letter d makes it easy to tell use to and used to apart in writing. But when speaking, use to and used to are almost interchangeable. The reason is phonetic: they sound almost identical to a listener.

Did you hear a difference? If not, you’re not the only one. There are a few reasons why your ear can’t tell them apart.

The S Sound in Use

The word use has different sounds depending on its context and purpose. When it’s used as a noun, it sounds one way; when it’s in a verb form, it sounds another way. Here are some examples of how use changes sounds.

When describing an activity you no longer do, you use the third pronunciation. Both use to and used to are pronounced with an s sound. Even though the past tense used has a z sound, it changes to an s sound in this context.

The D Sound in Used To

The d in used is another reason why it’s hard to tell these phrases apart. It blends with the t in to make use to and used to sound very similar. Because they both use the soft s sound as well, it’s hard to tell which phrase a speaker is actually saying.

The audible similarities between use to and used to sometimes make their way into writing. Even though you can’t hear the difference, not knowing the correct usage rules can result in errors like “I use to skateboard” or “Did you used to live next door to me?” As in every grammar rule, knowing the basics is the best way to avoid basic mistakes.

If you’ve got additional grammar questions, check out more resources on the differences between common words. Learn when to use in versus into in a sentence. You can also decide whether you should follow the a versus an guidelines every time, or whether there are exceptions to the rule.