Using At vs. In for Place and Time Correctly

The preposition battle is on. Break down how to use “at” vs. “in” when talking about time and place through examples. Not sure about prepositions? That is covered too. 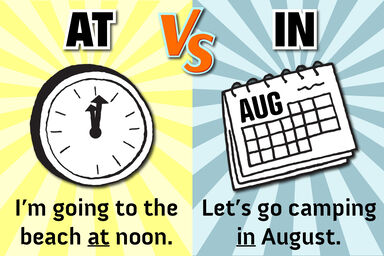 At vs In using time
Advertisement

Prepositions in a sentence can cause confusion, especially when it comes to using one preposition over another. Before you can understand when to use “in” and “at,” it’s important to cover what a preposition is in the first place.

A preposition typically comes before a noun and provides a relationship to another word or element in a sentence. For example, Susan is at the corner. “At” is telling you where Susan is. “In” versus “at” isn’t a battle royale, but it’s still important to know the difference when mastering the English language.

Prepositions of Time and Place Examples

While there is a long list of prepositions you can use in sentences, “in” and “at” are two common ones used for time and location. Even if you know the rules for prepositions, these can still get a little confusing.

Break down when to use “at” vs. “in” through preposition examples.

Deciding which word you should be using comes down to a question of where.

Location Sentence Examples for “At”

Examples work to really clarify how “at” is used in action.

Examples of Using “In” for Locations

When it comes to “in”, you know that its usage is different. That’s because you’re typically describing a location that’s inside of something. Explore how “in” is used in sentence examples.

Just like there are rules for using “in” vs. “at” for location, each will follow specific rules for time as well. Breaking these down can make them easier to remember.

Generally, holidays that do end with “day” would use the word “on” instead, as in, “The fireworks are scheduled for 9 p.m. on Independence Day.”

Sentence Examples of “At” for Time

Fun sentences that show how “at” is used can make the difference so much clearer. And, if you think you have the hang of it, you can try making examples of using “at” for time yourself.

Constructing Sentences Using “In” for Time

Writing sentences for time with “at” was a breeze. See how you can use “in” in a sentence to gain preposition mastery.

Getting Your Placement Perfect

The English language has a lot of interesting rules. Knowing how and when to use prepositions correctly for time and place is just one of them. After mastering “at” and “in”, you might try taking on the correct usage of in and on.