Using Do vs. Does Properly in Questions and Sentences

“Do” and “does” sentence examples are a great way to begin learning about the verb “to do.” Some forms of “do,” including “does,” are examples of helping verbs in English. These kinds of verbs extend the meaning of the main verb in a sentence. Before you compare “do” and “does,” it helps to understand verb tenses. 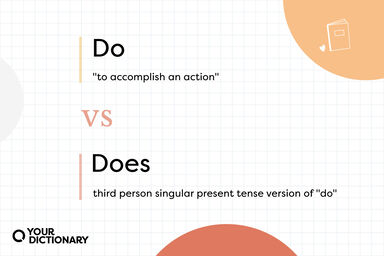 Notebook With Do vs. Does Definitions
Advertisement

Comparing “Do” and “Does”

Since “does” is really just a form of “do,” both words have a lot in common.

The dictionary definition of “do” actually includes several definitions, like “to perform,” “to bring about,” and “to solve,” while “does” only has one definition. The use of “do” and “does” is the key difference between the two words.

Using “Do” and “Does” in Sentences

When you use “do” in a sentence or “does” in a sentence, it will typically not be the first word. It can, however, fall anywhere else in the sentence. Can you see how “do” is used for plural subjects and “does” for singular subjects?

Using “Do” and “Does” in Questions

While there are many rules to remember when it comes to using the words “do” and “does,” there are some things you’ll never do with them.

Does That Do It for You?