Vaccine vs. Antiviral: Differences and How Each Works 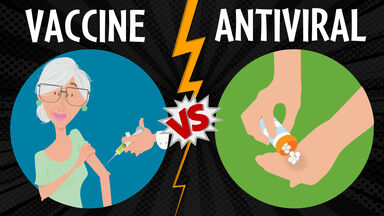 The biggest difference between vaccines and antiviral agents is when they are used in the course of a virus. Vaccines are part of preventative care and are usually given before a patient catches a virus. Once a patient becomes ill from a virus, a doctor would prescribe antiviral agents to fight the virus and stop it from infecting the patient further.

Before you learn about how vaccines and antiviral agents work, let’s take a moment to discuss how viruses work. Here are some basic facts about viruses and what they do in the human body.

Some viruses are more contagious than others. If you’d like to read more about common viruses, read an article that details viruses that cause disease in humans.

How Do Vaccines Work?

Starting from two months of age, you can receive vaccines that immunize you against many viruses. Vaccines are typically injections or nasal sprays that contain inactive viruses. When they enter a person’s body, their immune system fights the virus as if it were an active infection. This process trains the immune system to effectively fight the virus if the person encounters it again.

Vaccines contain different elements depending on the virus. Some vaccines use “live” viruses for the body to fight, while others only use parts of a virus. The four types of vaccines are:

If you’ve received routine vaccinations throughout your life, you’ve probably received each of these types of vaccines. Check out a list of vaccines from each category, as well as their common abbreviations.

Not everyone can get vaccines. They can be risky to people who are immunocompromised, such as cancer patients, infants younger than two months old, and elderly people. But if enough people in a population receive a vaccine, herd immunity can protect vulnerable people who can’t be vaccinated against dangerous viruses.

Why Don’t All Viruses Have Vaccines?

Scientists have developed vaccines for many viruses, including measles, smallpox, and polio, that have nearly eradicated these diseases. However, they have not been able to develop vaccines for viruses such as HIV (Human Immunodeficiency Virus) and malaria.

Lack of financial investment can make it difficult to research more complex viruses. Additionally, complex viruses often mutate too quickly to ensure 100% vaccination. For example, humans can be completely immunized against measles during childhood. However, they must receive new flu shots every year to cover mutated strains.

Can a Vaccine Make You Sick?

Patients may experience mild side effects after receiving vaccines. These side effects include mild fever, rash, or muscle aches at the injection site. Severe side effects are very rare (one or two out of a million patients).

However, because the virus in the vaccine is not active, the patient can’t catch the virus from the vaccine. Their side effects may mimic the symptoms of the illness, but in reality, their body is becoming stronger against the virus.

How Do Antiviral Drugs Work?

For viruses that do not have an effective vaccine, antiviral agents can be a good way to protect the body. Antiviral agents come in the form of medications or drugs. They stop the virus from replicating any further, which stops the infection before it can make the patient sicker.

Some examples of antiviral agents include:

Taking antiviral medication after you have caught a virus can shorten the time you are sick. However, taking these prescriptions before you become infected can’t prevent you from getting sick. They are only designed to stop a virus once it has infected host cells in a body.

Are Antiviral Agents and Antibiotics the Same Thing?

When patients feel sick, they often ask doctors for antibiotics in order to feel better. But antibiotic medication only works for illnesses that are caused by bacteria, such as tuberculosis and bacterial meningitis. It’s important not to take antibiotics more than necessary because your body might develop an antibiotic resistance.