Ways of Using Would vs. Could Correctly

Should you use “would” or “could" in your sentence? Not only is it a tongue twister, but it’s also confusing to figure out the difference. Don’t let your confusion of "would" vs. "could" lead to an embarrassing grammar mistake. Instead, follow these simple rules that are illustrated with example sentences. 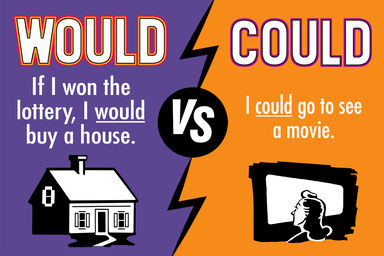 use of would vs could
Advertisement

“Would” vs. “Could:” The Difference

Both “would” and “could” are modal auxiliary verbs, which are better known as a form of helping verbs. Helping verbs have a great name, because they help the main verb in the sentence. Now that you know what they are, you can break down their respective meanings.

While they're clearly different, their usage in a sentence isn't always as clear. Find out which word to choose and when.

The Possibility of Using “Would” and “Could”

When it comes to ability and hypothetical situations, “would” and “could” are used slightly differently. Follow these quick and easy guidelines to never get confused again.

“Could” to Show Ability or Possibility

“Could” shows the ability to do something in the past or future. For example:

When I was younger, I could ride my bike home in 10 minutes.

“Could” shows how something is a possible but not definite.

“Would” to Show Certainty

While “could” shows ability or possibility, “would” shows certainty in a past or hypothetical situation. If you think about “would” being the past tense of “will,” then it completely makes sense. For example:

When I was younger, I would ride my bike home in 10 minutes.

Not only did you have the ability to ride your bike home in 10 minutes, but you did do it in 10 minutes. “Would” doesn’t leave any question or possibility.

Get a clearer understanding of this difference by looking at a few more example sentences.

“Would” and “could” can also be used together to show certainty and possibility like:

I would go on vacation if I could get the time off.

In other words, "I will definitely go on vacation if it is possible to get the time off."

If you ever have trouble deciding on “would” or “could,” remember where they come from.

Now, take a look at the difference between "would" and "could" in polite expressions.

Polite Expressions Using “Would” vs. “Could”

When it comes to polite expressions, like making a request or asking permission, “could” and “would” can be used pretty interchangeably. For example, you could say:

However, there are a few instances of polite expression where you only use “would” or “could.” Learn why.

Use “Could” for Making a Suggestion

When you are making a suggestion, you are offering a possibility. It is in no way definite. So, you will use "could" for suggestions.

As you can see, you are offering a possibility. If you were to put “would” into one of those same sentences, it turns it into a command rather than a suggestion. For example, “You would take Broadway.” As you can see, the choice is gone from the sentence, so it is no longer a suggestion.

Use “Would” for Offers and Invitations

Invitations should be definite. You don’t want to leave any question that you are offering or inviting someone. These expressions will use “would.”

The clue to the fact that this is an offer or invitation is the inclusion of the word “like.” Similar terms would work in much the same way. For example, "I would love to go to Barbados."

Correctly Using “Would” and “Could”

Sometimes the difference between “would” and “could” isn’t so clear. However, by knowing the rules, you can really clear things up. You have a bit of knowledge about verbs, so maybe think about giving action verbs a try. They might just have you screaming in joy!