Weary vs. Wary: Watch Which Word to Use

When you're driving late at night, you probably feel both weary and wary. But believe it or not, these words have two different meanings — and they're not interchangeable. Figure out whether you're feeling weary or wary in a new situation, and learn how the word leery figures into the situation. 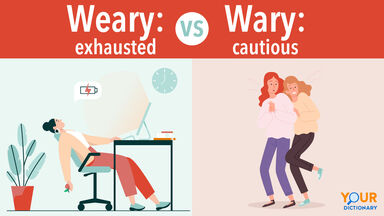 Are You Weary or Wary?

It seems like only the letter "e" separates weary and wary. But they're pronounced differently (weary is WEER-ee, wary is WARE-ee), and the differences in their definitions make these adjectives nearly opposites.

Why Weary and Wary Are Confusing

It's easy to confuse weary and wary because they look and sound enough alike to seem like synonyms. However, using one word instead of the other can confuse your readers.

How to Remember the Difference Between Wary and Weary

Telling the difference between weary and wary can be tricky, which is why many people confuse them. The trick is in the words beware and aware, which both sound like wary.

Weary comes from the Old English word wergian, meaning "to become tired." You're most likely to see it used as an adjective, but it also has a verb form.

How to Use Weary as an Adjective

You can be weary in two different ways. First, you can be physically exhausted.

You can also feel emotionally weary of an action. This usage typically comes before the word of with the same meaning as tired of. Think of it as the phrase "wearing out" or "worn out." For example:

How to Use Weary as a Verb

When something makes you tired or bored, it's wearying you. For example:

The Old English word wær, meaning "watchful," is the origin of wary. It's the same root as beware, aware and even guard.

Unlike weary, wary can only be used as an adjective. Examples of the correct usage of wary include:

The noun forms of weary and wary also sound quite similar. But weariness, which describes a state of exhaustion, and wariness, which refers to the state of caution, aren't the same word at all. For example:

Weary vs. Wary. vs. Leery

The word leery is a synonym for wary, but the only connection it has with weary is that they rhyme. In other words, leery and wary are interchangeable, but weary doesn't fit the same meaning. For example:

Don't be tempted to use weary when you can't think of the word leery. When in doubt, it's best to use the word cautious or watchful instead.

Don't Weary of Grammar Just Yet

Hopefully, you'll be a bit more wary when it comes to choosing the correct word in the future. It will make writing much less wearying for you when you have a stronger vocabulary! For more tips and tricks for confusing words, check out the difference between discrete and discreet.