What Is a Conservatorship vs. a Guardianship? A Closer Look

In some states, the terms conservatorship and guardianship are interchangeable. But in others, they’re quite different — they protect different people, they cover different needs, and they’re imposed in different ways. Be sure you’re using the proper terminology with a quick guide to each word. 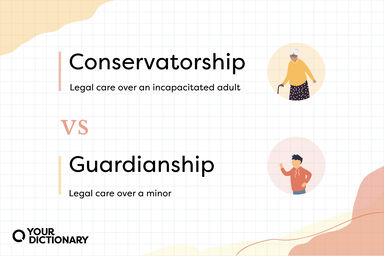 Being a conservator and a guardian both involve caring for another person. While specific conservatorship laws differ by state, there are a few general details that separate them from guardianships. A few of those details include:

The word conservator comes from the Latin conservator and the Anglo-French conservatour, meaning “an official who protects the interests and rights of another.” Conservators advocate for incapacitated adults in court, manage their financial situation and, in some situations, handle their medical and personal decisions (known as “conservatorship of the person”). One of the most famous (and contentious) conservatorships in recent history was Britney Spears’ conservatorship, which was controlled by her father until 2021.

Times When You’d Need a Conservatorship

When someone requires legal, financial or personal care, a potential caregiver would petition the court to establish a conservatorship. Examples of when a conservatorship may become necessary include:

Each case is different, and may require the guidance of legal authorities in one’s state. But if a court determines that an individual can no longer care for themselves, a conservatorship may be granted.

Guardian comes from the Old French gardien, meaning “guard” or “custodian.” Its meaning is similar to conservator — in fact, conservators are often called “adult guardians” — but legally, the term guardian often differs in its association with the care of children. If a child’s parent is no longer able to care for them, the court would establish a temporary guardianship for another adult to take the parent’s place, until the parent was able to regain custody, the child is adopted, or the child becomes emancipated (by turning 18 or getting married). And if the child inherited their parents’ estate, they would need a “guardian of the estate” (who may be a separate person).

Times When You’d Need a Guardianship

What About Power of Attorney?

Improve Vocabulary Beyond a Reasonable Doubt