When Do You Use Everyone vs. Every One?

Do you mix up everyone and every one every time you use them? Even though they seem interchangeable, they’re not. Keep reading to learn when everyone is correct, and when every one should keep the space between the words. 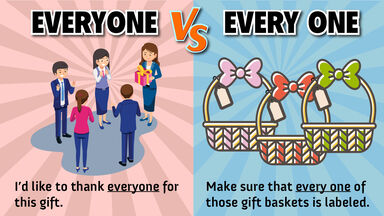 Everyone vs Every One Example
Advertisement

A Quick Trick to Tell the Difference

Of is your key to understanding which phrase to use. But why does of make such a difference? It’s because the difference between everyone and every one is their part of speech.

So, which is correct: everyone or every one? Even though they use the same words, you can’t use everyone and every one in the same ways. One replaces nouns and noun phrases, while the other is a noun and modifier phrase.

Everyone is the correct word to use when you’re talking about a nonspecific group of people. It is an indefinite pronoun that takes the place of nouns and noun phrases in a sentence. Everyone always refers to people, never objects.

Here are some examples of how everyone replaces a noun phrase in a sentence.

Even though everyone is talking about more than one person, it is always singular. Indefinite pronouns that end in -one (such as everyone and anyone) and -body (such as everybody or somebody) are singular. This can change the subject-verb agreement of the sentence if everyone replaces a plural noun.

Every One: Modifier + Noun

Every one is a noun phrase. One is the noun in the phrase and every is the modifier. It specifies that you are referring to each individual member of a group. A synonym for every one is each. That's another way you can test whether you should use everyone or every one in a sentence: replace it with each to see how it sounds.

Note that the word of follows each every one because you are specifying each member of a larger group (posters, neighbors gift baskets, and banquet chairs). Like everyone, every one is singular. But unlike everyone, it can refer to objects and not just people.

Everyone vs. Every One Quiz

Ready to challenge yourself? See if you can determine whether everyone or every one is the correct choice in these sentences.

How did you do? Check your answers at the bottom of the article.

If you’d like more grammar practice, try your luck with an extended English grammar quiz.

The rules of grammar can be confusing when words sound and look the same. Clear up more misunderstandings with an article on used to versus use to. You can also check out examples of into versus in to with sentence examples and explanations.