If I Was or If I Were: Easy Guide on Appropriate Use

Why do you say if I were when you would never say I were? And why is it more correct than if I was in some cases? Keep reading to learn when if I were is appropriate — and how to tell if you’re using it correctly in the conditional or subjunctive moods. 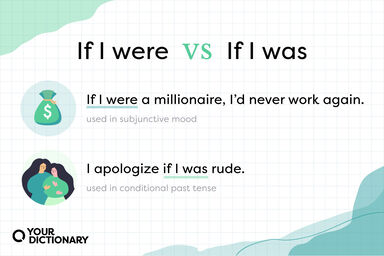 Even though they look almost identical, if I was and if I were are not interchangeable. The way you use them depends on the mood of your sentence. If I were is appropriate in the subjunctive mood, while if I was is only acceptable in conditional past-tense sentences. Let's look further into how to use the conditional if I were vs. if I was correctly in a sentence.

When to Use If I Was

You can use if I was in past-tense, first-person sentences that describe something the speaker was or has done. The conditional conjunction if indicates that one action in the sentence depends on another. For example:

The phrase if I was always comes before an adjective phrase that further describes the speaker. The word was indicates that the situation is likely and realistic. None of these sentences would be correct with if I were.

When to Use If I Were

If you’re trying to describe a hypothetical or doubtful situation, also known as the subjunctive mood, use if I were. Unlike sentences with if I was, these are cases that are contrary to current fact. Some if I were examples include:

These sentences are in both conditional (one action relies on another) and subjunctive (the if I were clause is contrary to fact). You could follow each statement with “But I’m not.” This is the easiest way to tell whether you are using if I were correctly.

Mood in writing isn’t just how the author wants you to feel. A sentence’s mood indicates the writer’s tone and how they want the reader to receive the message. There are several different grammatical moods that range from factual statements to commands.

Each of these types of sentence sends a different message to the listener or reader. Sometimes punctuation helps to set the mood, as does syntax. But in cases like the subjunctive or conditional moods, you need to know what verb conjugations and contractions to use.

Examples of Sentences in Both Moods

I would buy that car if I could afford it.

The speaker is saying that one action (buying a car) depends on another action (affording it). The word would indicates that the sentence is in the conditional mood. But if you change if I was to if I were, the sentence becomes subjunctive:

I would buy that car if I were richer.

In this case, the conditional action (buying a car) depends on a wishful situation (being richer). The fact that the second clause is unlikely or hypothetical makes the sentence both subjunctive and conditional.

Here are some more sentences that become both conditional and subjunctive with if I were.

If there are other grammar concepts that confuse you, you’re in the right place. A helpful article provides examples to clear up the difference between their, there, and they’re. You can also learn how to use use to vs used to correctly in a sentence.