When to Use Is vs. Are in Sentences

You can usually tell whether to use is or are by determining if the sentence sounds correct. But, there are times when the difference between is and are is not so easy to hear, and both words (or neither) seem right. Learn about those tricky times when it’s difficult to choose is or are – and how to find the right option. 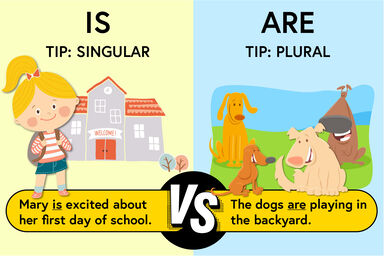 Is vs Are Example
Advertisement

Both is and are are forms of the linking verb to be. You can tell which form to use based on the noun performing the verb. Singular nouns use is, while plural nouns use are. When you use the correct form of a verb that matches your subject, that’s called subject-verb agreement.

It’s easier to tell whether you should use is or are in a simple sentence. For example:

There are a few exceptions, such as when using the pronoun I (which uses the verb am). But, what happens if the subject can’t be counted? And, should you use is or are after a list? The answers are simpler than you might think.

When to Use Is

Besides singular subjects, is would be the correct choice in several different contexts. In more complicated sentences, it’s harder to tell the difference. Here are some instances in which you should use is instead of are.

Either and neither are pronouns and adjectives, depending on their use. When you place either or neither in front of a singular noun, it takes the form of an adjective.

In the case of either/or and neither/nor subjects, they are singular pronouns. For example:

There is one exception to this rule. Even though these subjects are technically singular, they sound incorrect when the noun closest to the helping verb is plural. Check out this example:

Either my mother or my sisters is coming to my art show.

Because sisters is plural, is sounds odd next to it. You have two choices to correct this type of sentence:

These choices are both correct, so it comes down to your own preference. When in doubt, rewriting your sentence for clarity is the best idea.

Words like family or community can be confusing because they represent more than one person, making them seem plural. However, collective nouns almost always use is in a sentence. The exception is when you discuss the members of that group, making the noun plural. For example:

When to Use Are

Some tricky nouns use are even though they don’t seem plural. So, how can you tell the difference? Here are some examples of nouns that use are.

A Number or Pair

Using “a number of” or “a pair of” before a noun makes subject-verb agreement seem complicated. However, even if the noun is a collective noun, the traditional approach is to use are. For instance:

Because the phrase refers to the individuals in the group, it is considered plural. An exception to this rule would be for terms like “a pair of pants” or “a pair of scissors.” If the item is considered a singular object, it would use is.

If you can’t tell which verb is correct right away, consider reading more grammar resources. These five hacks are sure to improve your writing and vary your sentence style. You can also learn more about subject-verb agreement with an article that lists 20 important grammar rules.