When to Use What vs. Which for Correct Grammar

Although you can sometimes use “what” and “which” interchangeably, there are certain instances where only one of these words is correct. Find out when to use “what” vs. “which” in different situations. 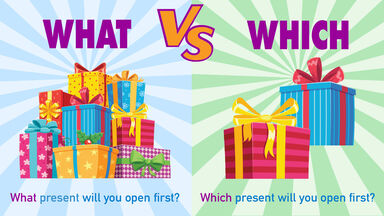 what vs which example
Advertisement

Key Difference Between “What” and “Which”

“What” and “which” are both interrogative pronouns. This means they stand for something the speaker does not yet know. They work for objects, qualities, or places, but they never work for people. For people, you generally use the word "who" instead.

The key differences between “what” and “which” are how many possibilities there are and how much you know about those possibilities.

“What” Is for Lots of Possibilities

Use “what” when there are lots of possible options or when you don’t know how many options there are. These are a few examples of using “what” in this way:

“Which” Is for Fewer Possibilities

In contrast, “which” indicates there are fewer possible options. You already know that the answer is one of two things or one of a few things. Knowing how to use “which” in a question means thinking about how much you already know. Using it indicates you have some background information, as you can see in these example sentences:

How Using “What” vs. “Which” Can Change Meaning

Because “what” indicates there are more options than “which,” the word you choose can subtly change the meaning of what you are saying. Before you decide to use “what” vs. “which” in interrogative sentences, you should understand how your word choice can affect the way other people perceive your meaning.

Choosing "which" implies you know something already. Usually, this is fine, but it can also be a little socially awkward if you don’t really have that background knowledge. For instance, consider the example of someone’s nationality. You could ask either of these questions:

Here, “which” implies you have already narrowed down the options based on previous knowledge. You may know that this person was born in Mexico, immigrated to the United States, and married someone originally from China. In contrast, “what” indicates you don’t know anything or you don't want to assume anything about the person’s nationality.

Because “which” refers to more limited options, the answers you receive to interrogative questions using “which” can also be more limited. This doesn’t matter most of the time, but it can be a problem in interview questions or when you’re trying to get as much information as possible. Consider this example:

In this case, the “what” question asks about the entire war and everything that happened during it. However, the “which” question sounds like it is asking about various options in a more restricted context. If you had been discussing various historical events, the answer would be limited to only the events you had already discussed that occurred during the war.

When Either Will Work

There are a lot of situations when either “what” or “which” will work perfectly well. Generally, these are times when there are several options but not infinite choices. This happens a lot, but here are a couple of situations where you might encounter it.

Consider the example of asking someone about his or her travel plans. There are only so many flights leaving an airport and going to a specific destination, so both “what” and “which” are correct.

There are only so many possible hours in a day or days in a month. This means you can generally use either “what” or “which” when talking about times and dates, as you can see in this example:

It’s always nice to have quick hacks to improve your English. In the case of “what” vs. “which,” there’s a really easy way to tell if you should be using one or the other. It doesn’t work 100% of the time, but it will help with many situations.

If you think it might be “which,” try adding the words “of your” or “of” and another pronoun right after it. If that works, “which” is the correct choice.

"What of your shirts are you considering for the photo?" makes no sense, so you'd use "which" in a question like that.

“What” and “Which” Are About Inferences

Choosing “what” vs. “which” is all about understanding the subtle inferences your reader or listener will make based on your word choice. Once you know how to use “what” and “which” properly, you can express yourself clearly when people read between the lines.