When to Use Written vs. Wrote 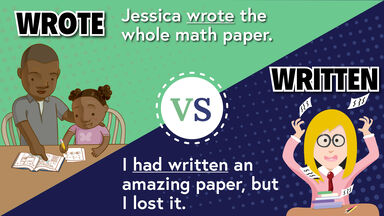 Written vs. Wrote: The Difference

It’s "written" there. It’s "wrote" there. Which one do you use? Knowing when and where to use “written” vs “wrote” is a battle that even some advanced English speakers don’t quite understand.

It’s always best to start with the basics. “Written” and “wrote” are both forms of the verb "to write."

So, what do simple past tense and past participle mean? That is where you'll find the answer to using "written" or "wrote" correctly.

Writing is never easy. But if you "wrote" something like "I wrote a letter," that means the action of writing happened in the past. "Wrote" also clarifies that it is completely finished. For example, if I "wrote a book," that book is now complete. To really nail this concept down, here are some example sentences.

You’ll notice that "wrote" always comes after the noun of the sentence. Beyond just being past tense, this can be a way to know when to use "wrote" vs. "written."

Using Written in a Sentence

"Written" isn’t as simple as "wrote" because you can use "written" a few different ways in a sentence. The fun thing about past participles is that they can make perfect tenses and they can be used as adjectives, too. But, what does that all mean? Explore each usage case deeper with lots of examples.

When you use "written" to make perfect verb tenses, you'll pair it with an auxiliary verb like "had" or "have." Check out a few sentence examples.

Past perfect tense shows writing that happened in the past and is finished. It typically includes "had."

Present perfect tense shows writing that is happening now or writing that will continue. It typically includes "has" or "have."

Future perfect tense demonstrates future writing endeavors with a definite end date. It uses the "will have" construction.

You’ll notice that the verb tense of the auxiliary verb is in the past, present or future tense, depending on the perfect verb tense you are trying to create.

Perfect tense was interesting, but "written" is a word of my masks, including that of an adjective. You can use "written" as an adjective to show something expressing or involving writing. Don’t believe it? Just look at how it is used in these sentence examples!

It’s All About Tense

"Wrote" and "written" can certainly get confusing. However, if you try to remember the verb tense that they take, then things will be a lot clearer. Now that you’ve read all the written words on this page that I wrote, you might want to check out verb phrase examples. You’re well on your way to becoming a grammar master!