Should You Use Whilst or While? Differences and Examples

Many writers think that whilst is just a fancy way to say while. They’re not exactly wrong — but they’re not exactly right, either. Sometimes whilst is a nice way to dress up a sentence, but in other situations, you can really only use while. It all depends on where you live and how you are using the word in a sentence. 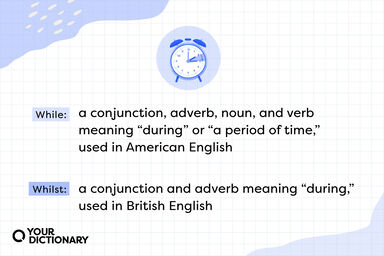 Clock With Whilst vs While Definitions
Advertisement

How ‘Whilst’ and ‘While’ Are Similar

If you’re used to speaking or reading in British English (or you’re an American who loves the British dialect), the word whilst, pronounced “WHY-ullst,” is a perfectly natural substitute for while. And that’s true — when you’re using whilst as a conjunction that links two parts of a sentence, or an adverb that modifies a word or phrase. For example:

How ‘Whilst’ and ‘While’ Are Different

But the similarity between whilst and while stops there. In addition to a conjunction and adverb, you can use while as a noun to mean “a period of time” and a verb meaning “to spend time,” but not whilst. For example:

As you can see, the difference between whilst and while has more to do with grammar than American vs. British English. But as long as you’re using whilst as a conjunction or an adverb, you’re free to replace it with while all you want, no matter what side of the pond you’re on.

Whilst: The British Choice

Whilst is a 14th-century Middle English word that was derived from the earlier while. It follows an obsolete adverb rule, which adds -st to existing words (much like amidst or amongst). While it’s a favored choice for British writers and speakers, it’s not nearly as popular as while among online users.

How To Use ‘Whilst’ in a Sentence

While: A More Versatile Choice

If the above examples sound too formal, you may prefer the versatile while in all cases, not just when using it as a noun or verb. While comes from the Old English hwīl (pronounced “why-ull”) and has had many meanings over the last several centuries, all of which refer to time. Today, while is most often used as a subordinating conjunction or a sentence adverb, with its noun and verb uses less frequent.

How To Use ‘While’ in a Sentence

When using while as a conjunction, adverb, noun or verb, it looks like:

Quick Chart Comparing While vs. Whilst

Use a simple chart to quickly understand the difference between whilst and while.