Is It Whisky or Whiskey? The Root of the Issue and Why It Matters

On the rocks or neat? With a twist or not? True whiskey lovers tend to feel strongly about their preferred way to serve their favorite spirit. But the debate that really reddens their cheeks involves the most important ingredient choice of all — the letter “E.” Is there a real difference between whiskey and whisky, or is this just another watered-down grammar argument? 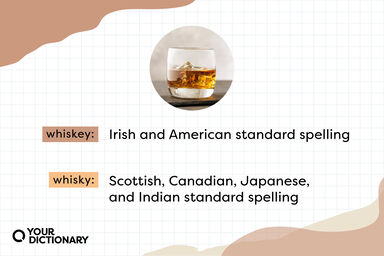 What Is Whiskey (or Whisky)?

Whiskey and whisky describe an amber-colored alcoholic drink made from fermented (sometimes malted) grains, which can include barley, corn, wheat, and rye. Though no one knows exactly who invented it, the first whiskey appeared in Scotland and Ireland around the 15th century.

Is It Spelled “Whiskey” or “Whisky”?

Whiskey and whisky (both pronounced “WISK-ee” in American English, with more emphasis on the “H” in other dialects) come from the Gaelic word uisge beatha (ISH-kah-bah-hah), meaning “water of life.” It was shortened to uisge (ISH-kah) in Scottish Gaelic, then eventually the Anglicized whisky. In some parts of Ireland, it was always spelled whiskey, possibly preserving the original beatha wording.

Today, the worldwide popularity of whisky and whiskey is almost equal. The spelling depends on where you’re drinking it — and more importantly, where it was distilled. But it doesn’t depend on the way the drink was made, as that process can vary from country to country.

It’s “Whiskey” in Ireland and the United States

Irish whiskey is spelled with an “E,” just like American whiskey. And that’s no coincidence.

Before the late 19th century, nearly everyone spelled it whisky. But after some heated debate between Scottish and Irish distilleries on the proper composition of whiskey (the Scots were using grain blends, the Irish weren’t), many Irish distilleries began spelling whisky with the traditional Irish “E” to differentiate their “superior” product from the Scottish variety. The marketing worked — Irish whiskey soon became more popular than Scottish whisky.

Meanwhile, in North America, whiskey was Americans’ favorite drink. Their love of whiskey began with Irish immigrants and inspired the invention of American whiskey, known as bourbon. But around the turn of the 20th century, Canadian rivals were selling more whisky than American distilleries. Following the successful Irish influence, most Americans began calling their drink whiskey, and they haven’t stopped since.

It’s “Whisky” in Scotland, Canada, and Everywhere Else

If you’re not in Ireland or the United States, spell it whisky. The most important place to remember this difference is in Scotland, where the difference is a matter of law. And make sure to spell it whisky in Canada, home of the popular Crown Royal Whisky and Fireball Canadian Whisky.

India and Japan, two major whisky producers, were influenced by Scottish whisky-making practices as well. Scotch whisky was a favorite drink of British soldiers stationed in India during the 19th century, inspiring the creation of Indian whisky distilleries.  And Masataka Taketsuru, known as the “Father of Japanese Whisky,” studied whisky making in Scotland.

Should You Spell It “Whiskeys” or “Whiskies”?

When describing more than one whiskey (or whisky), the spelling changes even more. But it’s not too hard to remember if you’re familiar with basic plural noun rules.

It may seem like the difference doesn’t matter — until you’re ordering a round of whiskeys (or whiskies) for the table. And even then, the words sound identical unless you’re writing it down.

If you need more help remembering: Both Ireland and America have an "E," like whiskey; Scotland, Canada, India, and Japan don't have an "E" (like whisky).