Who vs. That vs. Which: Fundamental Grammar Rules

What’s the difference between which, that, and who? It seems like the answer should be straightforward, but it’s trickier than it seems. Keep reading to learn how to use these words correctly when describing another noun. 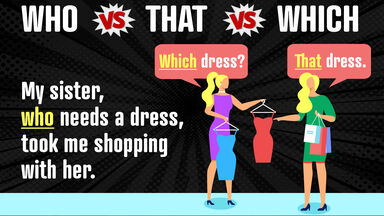 Who vs That vs Which Example
Advertisement

Who, That and Which Word Meanings

Even though these pronouns seem interchangeable, they’re not. There are specific times to use each one. Here are some quick ways to remember whether who, that, and which are the right words to use.

That overlaps meaning with who and which. So, why can’t you use that in every situation? It turns out that when you use these pronouns to introduce relative clauses, the sentence’s context determines which pronoun you should use.

Who as a Relative Pronoun

Who is only appropriate when talking about people or plural groups of individual people, such as teachers, men, children, and actors. You can use who in either a non-restrictive or restrictive clause. Here are some examples of who as a relative pronoun.

That as a Relative Pronoun

You can use that to describe objects, groups, or non-humans. That is a relative pronoun used in restrictive clauses without commas. For example:

There is some debate as to whether a writer can use that instead of who in a sentence. Using that is acceptable in some informal cases, such as with animals or organizations that are composed of people (e.g., club, team, class), or when using that as a demonstrative pronoun. However, who is the preferred relative pronoun when talking about people.

Which as a Relative Pronoun

The difference between which and that is how they are used. They both identify objects and non-humans, but unlike that, which is appropriate in sentences with non-restrictive clauses. For example:

All of these sentences are understandable if you remove the relative clauses that begin with which. When trying to decide if you should use that or which, look at the commas. If you use a comma to describe an object, use which. If you don’t use a comma, use that.

Both who and which are also interrogative pronouns, which means that you can use them to ask questions. However, as you might have guessed, they are not interchangeable. Here are some ways to use who in interrogative sentences.

Each of these sentences, whether they are direct or indirect questions, has one goal: to find the identity of a person. But, when using which, the goal is deciding between two or more options. Unlike who, which is often accompanied by a noun. For example:

Both who and which are important pronouns to know when asking for more information. While that is not an interrogative pronoun, it can be used as a demonstrative pronoun to answer these questions. Check out these examples to see how:

If you’d like to learn more about pronouns, check out an article that provides lists and examples of personal, demonstrative, and indefinite pronouns. You can also learn more about subject vs. object pronouns and when to use each type.