Is It Whoa or Woah? Getting the Popular Slang Term Right

Your friend texts “Woah” in reaction to your big news, and all you can do is roll your eyes. “It’s whoa,” you type out, but then you delete it and frown. Is it really whoa, or is your friend correct with woah? The answer has to do with horses, sailors, and Keanu Reeves. 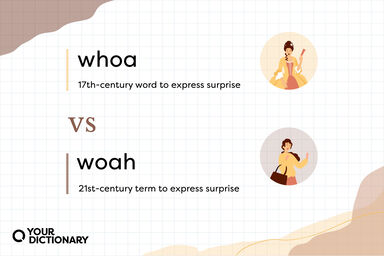 The difference between whoa and woah only involves spelling. Both words are pronounced the same way (rhyming with doe and mow). They’re also both informal interjections, which are words that interrupt the flow of a sentence to express emotion.

In the case of whoa and woah, the speaker is saying “Stop!” or “That’s surprising!”

“Whoa” Is the Original Spelling

Fans of whoa are used to this spelling because it’s older. The 17th-century word whoa comes from:

Whoa first appeared in English as an equestrian term to calm a horse. Even today, the word is associated with horses: There’s the Walking Horse Owner’s Association (W.H.O.A.) and the Whoa Podcast for horse owners.

Whoa became a popular slang term in the 1950s, thanks to The Roy Rogers Show and Pat Brady’s catchphrase “Whoa, Nelly!” in response to his disobedient jeep, Nellybelle.

A few decades later, whoa was popular surfer slang — popularized by Bill and Ted’s Excellent Adventure star Keanu Reeves, who’s made “Whoa” something of a catchphrase (he’s said it over 100 times in his career).

In 2008, the pop song “Like Whoa” by Aly & AJ immortalized whoa as the preferred spelling of the word. In all of these versions, whoa means “stop” with a touch of “that’s amazing” — the perfect mixture of ho and wow.

But “Woah” Is Trendy

Woah is pronounced just like whoa, even though it separates the “h” from the “o” (eliminating its ho roots). It entered the scene in 2017, when a dance called "The Woah" emerged online. Woah enjoyed a huge spike of popularity and became a trending dance move before reaching viral meme status as an epic TikTok challenge (#hitthewoah)

Today, woah’s popularity is almost the same as its original version. Even the slang phrase like whoa, inspired by the Aly & AJ song, has become less popular than the alternative like woah. So while whoa is technically the real word (and the only one that appears in most dictionaries), using woah instead can make you sound cool and trendy — which, in some cases, may be your preference.

Since both whoa and woah are technically slang terms, it’s best to keep them to informal writing, such as emails and texts. But what about when you’re writing a fictional story and you want your character to be surprised? Should they say whoa or woah?

Try to divide up their usage by the means of communication. If the character is speaking in dialogue, they’d use whoa. For example:

But if the character is texting, they might use woah. For example:

Modern Versions of “Whoa” and “Woah”

If you don’t like whoa and you just can’t get behind woah, there are lots of other options you can use to express surprise. They don’t all have to be old-fashioned interjections (“gee whiz” and “holy mackerel” had their day) or surprise-face emojis; for something in between, try:

Why Do People Use a Typo on Purpose?

The wordsmiths among us don’t like this one bit. Why would people use a misspelled word on purpose? Since when do we allow online trends and memes to dictate our spelling?

It’s not the first time. The popular stonks meme uses a purposeful misspelling (also known as satiric misspelling) of stocks to make fun of those who don’t know much about economics. The same goes for the term dogecoin — a very real word for cryptocurrency inspired by a misspelling joke.

And that’s not even including the many words that started as misspellings or nonstandard spellings, but found themselves in the dictionary anyway (we’re looking at you, alright and conversate).