Wholistic vs. Holistic: A Complete Comparison 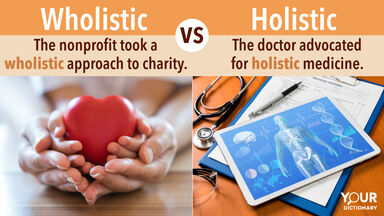 Which Spelling Should You Use, Wholistic or Holistic?

Origin and Etymology of Holistic and Wholistic

The term holistic originated in the 1920s when it was coined by a South African soldier and scientist named Jan Christian Smuts. Smuts viewed the universe in terms of “wholes” (i.e. organisms and systems) and published a book called Holism and Evolution in 1926. The term holism comes from the Greek word holos, which means “whole.” This term and philosophy was then adopted in various fields, particularly medicine, as a means of treating the “whole person” rather than individual symptoms. Essentially, “the whole is greater than the sum of its parts.”

Wholistic is a variant of holistic that was first used around the 1930s. It is no surprise that the “w” was adopted and spelling wholistic became popular. After all, the term holistic means “whole.” However, it gets even more complicated. The word comes from the Middle English word hal, which means “whole, entire, uninjured, or sound.” This is derived from the Proto-Germanic haila, which means “undamaged.” This is also the root of related words like health, heal and hale.

Meaning and Usage of Holistic

Holistic is an adjective that means “dealing with the whole of something.” For example, holistic medicine focuses on the mind, body and spirit as a cohesive whole that works together.

How to Use Wholistic in a Sentence

Wholistic has the same meaning as holistic, but it is typically thought of as a misspelling of holistic. Generally, holistic is better to use in medicinal contexts, but wholistic can be used in other contexts.

A (W)holistic Approach to Spelling

If you want to make sure you spell the whole word correctly, read up on other commonly confused words. Normalcy and normality are similar because one or the other is generally considered correct depending on where you live, but both are often used interchangeably. Then explore the differences between preventative and preventive.