Whose vs. Who's: Get Acquainted With Which One to Use

Whose and who's sound identical, but they're not the same word at all. That makes them easy to mix up, resulting in avoidable grammar mistakes. Check your pronoun knowledge with this quick reference guide to whose vs. who's. 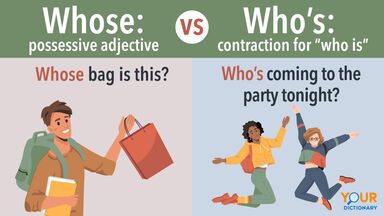 Whose - Man with bag vs Who's - Girls jumping
Advertisement

Differences Between Whose and Who's

The words whose and who's are forms of the pronoun who, which is a subject pronoun meaning "what person." The difference in their meanings are:

Because who can be an interrogative pronoun (asks a question) or a relative pronoun (adds information), whose and who's can also function in these ways. It depends on the context of the sentence.

Meaning of Whose: Questioning or Showing Ownership

When you use whose in a sentence, you're indicating that a noun has ownership. But depending on how you use it, whose may be questioning or showing that ownership.

Using Whose as an Interrogative Adjective or Pronoun

Whose can also be an interrogative pronoun when it replaces the noun. For example:

Using Whose as a Relative Pronoun

When the word whose comes before a relative clause, it functions as a relative pronoun to provide more information about a noun. For example:

Meaning of Who's: Who Is or Who Has

So how does who's work in a sentence? There are only two times to use who's: when you're writing a contraction for "who is" or "who has."

Examples Using Who Is

You'll find the word who's replacing "who is" in present tense and present progressive sentences. It typically comes before an adjective or participle (known as a predicate adjective). For example:

Who's also appears before a noun that describes the subject of the sentence (a predicate noun or predicate nominative) For example:

Examples Using Who Has

When who's replaces "who has," it's in a perfect present sentence to show that an action has happened before this moment. For example:

Tip for Remembering Whose vs. Who's

The easiest way to tell whose and who's apart is to replace the word with "who is" (or "who has"). But if that's still confusing, just look at the word after whose or who's. If it's a noun, use whose. If it's a verb or adjective, use who's.

Become a Grammar Pro With Pronouns

Confusing whose and who's is understandable; they sound similar, and they both function in similar ways to the pronoun who. Knowing the difference between them, however, can help you avoid embarrassing grammar mistakes. For more information on commonly confused pronouns, learn when to use who vs. that vs. which. You can also impress your readers (and your teachers) by mastering the difference between who vs. whom.