When choosing a synonym for yes, yeah is probably the first word that comes to mind. However, some people may confuse yea with yeah and use the spellings interchangeably when in fact they are two separate words. Discover when and how to use yea and yeah. 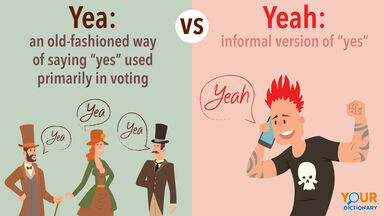 The Difference Between Yea and Yeah

While yea and yeah look similar and have the same meaning, they do not sound alike and are typically used in different contexts. Yea (pronounced yay) comes from the Old English gēa. On the other hand, yeah (pronounced yah) is by far the more common variation and is an informal version of yes.

How and When to Use Yea

Yea is a formal, old-fashioned version of yes and is typically only used in voting or if you are writing a period piece. For example:

Using Yeah in a Sentence

While yea is formal and rarely used, yeah is standard in everyday conversation and writing.

Yea and yay sound alike, making them homophones, but they have different and unrelated meanings. Yay is an exclamation of excitement, triumph or approval. It is also sometimes used to describe a particular or undefined length or degree of something.

There are numerous words that have two correct spellings that are meant to be used in different contexts or where one is favored by different writing guides. For example, both blond and blonde are correct, but which should you use and when? Then check out when to use practice and practise.