What's the Difference Between Miss, Ms., and Mrs.?

The difference between Mrs. and Miss or Ms. might seem obvious, but there’s a lot you can discover about all three feminine titles. Learning how and when to use the titles “Miss,” “Ms.” and “Mrs.” properly can ensure you show respect to the female recipient of a comment, question, or written correspondence. 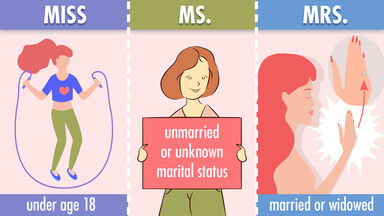 There are a few basic etiquette rules that make it easy to remember whether to use "Miss," "Ms." or Mrs. These are the main uses of the titles for addressing letters, invitations, emails, cards, and people in conversations, but there are always exceptions.

What Does Miss Mean?

The title “Miss” is pronounced phonetically, or exactly how it looks. The word “Miss” rhymes with “hiss” or “this.”

Examples of When to Use Miss

“Miss” is used in several ways in the English language. Some uses are regional, like the use of “Miss” with any woman’s first name as a sign of respect in the American South or Canada.

What Does Ms. Mean?

The title "Ms." was born out of the women's movement in the 1970s when women felt "Ms." was a fair equivalent to "Mr.," whether they were married or unmarried. Today, "Ms." is used as a title for women who prefer not to be labeled by their relationship status. It’s also used in cases where you don’t know the marital status of the person you are addressing.

The main pronunciation of "Ms." is “mizz” to help distinguish it from "Miss" or Mrs. However, in many regions, you’ll hear people pronounce it the same as "Miss".

Examples of When to Use Ms.

What Does Mrs. Mean?

Interestingly, "Missus" is the informal version of "mistress." That’s why there’s an “r” in the abbreviation “Mrs.” In the mid-1700s, mistress was the female equivalent of master and an honorary term used to address a superior. When the term "Miss" came about in the late 1700s, the term “Mrs.” was used more for married women specifically.

In American English, you never see the full word "Missus" written out. On rare occasions, you might see it in British English. But, on both sides of the Atlantic, "Mrs." is used to address a married woman.

The title “Mrs.” can be pronounced in slightly different ways depending on where you are in the world. You may hear it pronounced “miss-iz,” “miz-iz” or “miss-iss.”

Examples of When to Use Mrs.

It's important to note a key difference between the American and British spellings of “Mrs.” In the United Kingdom, folks tend not to put a period after “Mrs.” When a woman marries, she traditionally takes her husband's last name. “Mrs.” is most often used in conjunction with this new last name.

Use of Missus and Mistress

If you're a fan of historical fiction, you might notice some of the married ladies from prior centuries referred to as "Mistress Fraser" or "Mistress McKenna." This is the correct period-specific way to address certain women.

In modern use, "mistress" has devolved to refer to a woman who is committing adultery with a married man.

How to Use Doctor as a Title

You use the title Doctor, or Dr., no matter the gender of the physician. So, you might have an appointment as a new patient with Dr. Shepherd or Dr. Randall with nothing to indicate their gender except your online research.

How to Use Professor as a Title

Another example of this is college professors. It's Professor Klaeger or Professor Luskay, no matter their gender.

How to Use Mx as a Title

The title “Mx” emerged in the late 1970s as a way to respect people who choose not to identify with one gender. Nonbinary individuals, as well as those who don't wish to be labeled by their gender, might use the title “Mx.” Because of its widely accepted use in the United Kingdom, it is not followed by a period. The title “Mx” is pronounced either “mix” or “mux.”

Call a Woman by Her Preferred Name

While these are the general rules of thumb for "Miss", "Ms.", and “Mrs.,” it's wise to do a little research before addressing a woman in any of these manners. You might offend a married woman by calling her "Miss" and vice versa. The best way to know which title to use is to ask the woman which she prefers. Continue learning how to use title abbreviations by exploring Messrs., Mmes., and Mses., the plural forms of Mr., Mrs., and Ms.