The English language has been influenced by many cultures, including the ancient Aztec empire. Several commonly used English words can trace their origin to Aztec terms from the Nahuatl language. Discover 17 Aztec words that are often used in the English language. 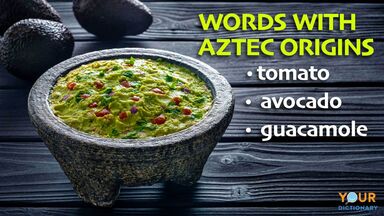 Several terms for foods commonly eaten in English speaking countries (and other parts of the world) can be traced back to the Aztec people and their Nahuatl language.

The word avocado comes from the Aztec word ahuacatl. While some sources claim that the term ahuacatl actually means testicle in the Nahuatl language, this is not accurate. It is simply the Nahuatl word for the type of fruit referred to in guacamole. While the actual Aztec word isn't a common English word, its translation to avocado certainly is. This popular fruit is enjoyed in its natural form, mixed with other ingredients to form guacamole or even to make dessert recipes like vegan chocolate mousse.

Considered a superfood today, the term cacao is not used to refer to unrefined (raw) beans (seeds) of the cacao tree, and the tree itself. The word's origin is the Aztec term cacahuatl. Many people eat pieces of cacao beans, referred to as cacao nibs, as substitutes for sweetened and refined chocolate chips. There are also many recipes for dishes prepared with raw cacao.

The Aztec culture is responsible for several spicy foods that remain popular in many countries today, as well as the words that describe these foods. The word chili, derived from the Aztec word chilli, so the modern term is almost identical to its ancient counterpart. This word originally referred specifically to chili peppers, though now it is also used to refer to a rich, spicy tomato-based dish flavored with them that also features beans and/or meat.

Another superfood, chia seeds, can credit its name to the Nahuatl language. The Aztecs, along with the Mayans, considered chia seeds, which they referred to as chian, a dietary staple. They made flour from chia seeds and used cooking oil pressed from chia seeds. These seeds are popular today, largely due to their many medicinal and nutritional benefits. It is used in many vegan recipes and other dishes.

Chipotle peppers are a uniquely delicious spicy treat in the form of smoked jalapenos. The word chipotle comes from the Nahuatl term chilpoctli, which is a combination of separate words for chili pepper (chilli) and smoked (pōctli).

Chocolate is another English term that can be traced to the Aztec culture. The word chocolate derives from the Aztec word chocolatl, which is a combination of the words chikolli and atl, that refer to the tool used to combine cocoa beans with milk or water in order to create a flavored beverage. Though the term chocolate originally referred to this type of beverage, it is now widely used to refer to any food or drink that contains cocoa in any form.

Speaking of avocados and guacamole, the word guacamole also originates from the Aztecs. Ahuacamolli, is actually a combination of the Nahuatl words for avocado (ahuacatl) and the word for sauce (molli). So, if you're ever looking for a different term for guacamole, you just might want to refer to the tasty condiment/side dish/ingredient as avocado sauce.

Mole, a staple sauce in Mexican cuisine and enjoyed in many English speaking countries, can also be traced to Aztec origins. Mole is a spicy sauce with a base of tomato and chocolate combined with various spices. It's used to prepare many many Mexican and Tex-Mex dishes, including chili and enchilada sauce. It derives from the word molli, which means sauce and is the origin of the second syllable in guacamole. It's actually redundant to say "mole sauce," as that would be like calling it "sauce sauce."

Tamales are a popular Mexican food item featuring spiced meat encased in a thick corn paste cooked inside corn husks. This flavorful treat takes its name from the Aztec term tamalii, which translates into English as wrapped food.

The English word for tomato gets its beginnings from the Aztec term tomatl. The Aztecs are credited with being the first to deliberately cultivate this popular fruit for culinary purposes.

Other English Words of Aztec Origin

While there are a number of food-related terms of Aztec origin, the influence of Nahuatl on the English language doesn't stop with culinary words. You may be surprised to discover some of the other English words with Aztec etymology.

The word Aztec itself derives from the Nahuatl word aztecatl. The word aztecatl refers to the people whose empire in Mexico was overthrown by the Spanish conquistador Hernan Cortes in the early 1500s. The term refers to those who come from Aztlan, the legendary home of the ancestors of the people who have come to be known as Aztecs.

The word coyote is derived from the Aztec term coyotl. While coyote refers to an animal, there is more to the Aztec lore. This word actually plays a role in Aztec mythology as Huehuecóyotl (which translates into English as Old Coyote), is the god of dance, who is known as a trickster that incites men to engage in hedonistic behaviors.

The English word mesquite can be traced back to the Nahuatl language of the Aztecs. This is a specific type of tree that is native to Mexico and the southwestern region of the United States of America. Mesquite chips are often used in cooking, most often to flavor smoked meat.

The name of the agave-based spirit mezcal can be traced to the Aztec word mexcalli. This Nahuatl term translated to agave that has been cooked in the oven. Mezcal is a strong liquor somewhat similar to tequila in both flavor and impact on those who drink it. People typically sip it straight or use it in mixed drinks.

Ocelots are small jaguars native to parts of North America, Central America and South America. Their English name can be traced back to the very similar Nahuatl word ocelotl.

The plant now called peyote is a hallucinogenic used by some as a recreational drug or as part of a personal spiritual journey. Some refer to peyote as the "divine plant" or the "divine cactus." It was originally called peyotl in the Nahuatl language.

It is believed that the English word shack evolved from the Aztec word xahcalli. The term xahcalli is used to refer to a primitive structure used as a dwelling or shelter. However, it is possible that the word shack found its way into English via the Gaelic word teach (which is pronounced chac).

English Is Influenced by Many Languages

Many English words have a foreign origin. Now that you are familiar with some of the Nahuatl words that some common English terms are based on, take the time to learn more about the other languages that have impacted English. Start by reviewing a list of English words of Spanish origin. From there, explore 40 English words of Japanese origin used every day. You may also want to explore more facts about the Aztecs.